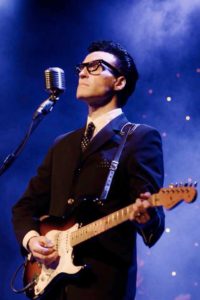 TALENTED singer and Buddy Holly lookalike, Spencer Jordan, will present a musical homage to his idol at Axminster Guildhall on Friday, September 28.

It’s set to be a spectacular night as this fast-paced, hit touring show comes to town.

Spencer’s vocals have been described as “spot-on” by Vintage Rock magazine, which went on to note that “he not only gets the look and sound right, but also the stage moves that characterised Lubbock’s most famous son. It could be the famous Texan himself!”

The members of the band, the Copy-Cat Crickets, have backed the biggest names in the world of rock n roll, including the Everly Brothers, George Harrison and the late, great Chuck Berry.

The show will take you on an exciting and, at times, emotional journey through the music and life of Buddy & the Crickets, from ‘Blue Days’ to ‘True Love Ways’.

With “astonishingly authentic recreations” of all the hits and more, you’ll be transported back to the age of the record hop, the drive-in diner and the soda shop. To a time when teenagers ruled the dance-halls of Britain, and you’re sure to feel sixteen again as you re-live the magical music of that golden age.

You’ll hear the fascinating true stories behind the songs, from the early rockabilly numbers, to the last song Buddy Holly ever wrote. Along the way you’ll discover which famous movie star had a hand in writing the million-seller ‘That’ll Be The Day’ and which band member married the real ‘Peggy Sue’.

By the end of the show you’ll know why theatre audiences all over the country have been saying ‘I Can’t Believe It’s Not Buddy’.

The show is for one night only, so book your tickets fast by calling the box office on 01297 33595 or via the website www.wegottickets.com

SIGNED to Brian Eno’s record label, the Penguin Café Orchestra found fame in the 1980s and 90s with pieces such as ‘Telephone’ and ‘Rubber Band’, ‘Music For a Found Harmonium’, and ‘Air A Danser’. […]

Get in the swing for Jazz Jurassica

LEGENDARY jazz and blues artist Georgie Fame opens this year’s Jazz Jurassica festival in Lyme Regis with what promises to be the start of a musical extravaganza over the Bank Holiday weekend. […]

HUSBAND and wife duo, Alex and Alison Davies, will give a concert of music for organ, piano and saxophone in Lyme Regis next week. […]