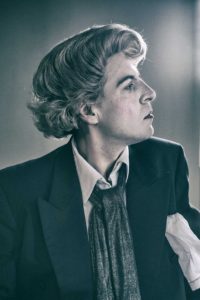 FROM a conventional upbringing to global notoriety via ‘The Naked Civil Servant’, Quentin Crisp was an extraordinary raconteur and wit, and one of the most memorable figures of the twentieth century.

Openly gay as early as the 1930s, Quentin spent decades being beaten up on London’s streets for his refusal to be anything less than himself. His courage, and the powerful philosophy that evolved from those experiences, inspire to the present day.

‘Quentin Crisp: Naked Hope’ is fresh from a UK tour and shows Quentin in his beloved Chelsea flat in the 1960s, and in his final years in his adopted New York.

Mark Farrelly plays the lead and his West End credits include ‘Who’s Afraid of Virginia Woolf?’ opposite Matthew Kelly. He is directed by ‘EastEnders’ star Linda Marlowe (‘Berkoff’s Women’).

‘Farrelly’s mastery of his audience is total. Brilliant’ – ★★★★ Time Out

The play comes to the Marine Theatre in Lyme Regis on Thursday, February 21 with the bar opening at 7pm for an 8pm start.

“You can’t take the Marine out of the girl”

Lighting up the gardens will be a big attraction for Lyme

THE public gardens in Lyme Regis have been the most admired of the town’s attractions, a peaceful haven to escape the hustle of bustle of a busy seaside resort. […]

AS the Marine Theatre in Lyme Regis comes to the end of its 125th anniversary year, a special community play will be staged to mark the milestone. […]