Review by By Gill Hanscombe

A PACKED audience enjoyed the first performance of ‘Go, Goliath!’, written as a special commission by composer Nicholas Brown and with text by Simon Ford, at St Michael’s Parish Church in Lyme Regis last Saturday.

The story might be old, but this dramatic new piece was fresh and modern: there were many children in the audience and they were riveted right from the start.

Scored for organ, piano and saxophone, male principal singers and adult and children’s choirs, this premiere performance took just over half an hour.

The music offered innovative ways of combining voices and instruments; sometimes colour came from deep organ resonance, at other times from a mellow saxophone obbligato, while throughout, the piano part moved through a palette of musical idioms from hints of folk and music hall to jazz and classical lyricism.

Composed in six sections or ‘scenes’, the work enacts how David slew Goliath (and why), by deftly moving the text between principals and choirs, with short instrumental interludes acting as section breaks.

In this performance, the narrator’s role was sung by Daniel Rudge, whose rich baritone effortlessly filled the space. The music for this part was the most decorated and vocally demanding, and it was sung with a confident and convincing technique.

The other soloists included David Fouracre as Goliath, suitably menacing in his growling deep notes, and Alex McNeice as David, who had a sweet lyric tenor voice that should fill out more with further development.

There were a further three single-line parts for David’s father Jesse, a passer-by, and King Saul, all of which were sung with pleasant competence.

As is usual in music drama, the intermittent commentary came from the chorus, made up not only of the adults of Lyme Bay Chorale, St Michael’s church choir and extra singers, but also of 40-plus boys and girls from the Devon County Junior Choir, superbly directed by Rachel Smith.

Unaccountably, only four of St Michael’s own children’s choir were there to join them, so some of our local children missed a rare and exciting experience.

Before ‘Go, Goliath!’ we were treated to half an hour of vocal music from the Devon County Junior Choir.

The first piece, ‘Cantate Domino’ by Anna Laura Page, was particularly moving because the blend of girls’ and boys’ voices in an excellent unison was tonally accurate, very lyrical and unforced.

The following songs – ‘Joshua’, ‘You Raise Me Up’, ‘Electricity’ and ‘Sailing’ – showed great vocal facility for such young singers; they had command of rhythmic variation, accuracy of pitch and singing in parts, as well as having some control over colour, intensity, warmth and humour.

The whole company for ‘Go, Goliath!’ deserves unreserved congratulations for presenting such a fine performance. They had already rehearsed throughout the afternoon and the children’s choir in particular were wonderfully disciplined; still when required, full of energy when singing, and able to give complete attention to the conductor.

The staging was cleverly arranged so the adult choir filled the chancel, the children’s choir ranged across the top of the nave, the narrator used the pulpit, the soloists could fill the space in front of the conductor, the organ could swell out from the back of the church, and the piano and sax were placed at the side. These placings made even more accessible the different dramatic combinations of voice and instrument.

It was a privilege to be in the audience for this event, and to know that in our region, musicians and singers, adults and children, can have the ambition and energy to initiate and complete such a large-scale project as a new music drama.

Thanks are due to organist Alex Davies, who directs Lyme Bay Chorale, saxophonist Alison Davis, pianist and musical scholar Peter Lea-Cox, soloists and choirs, and of course to composer Nicholas Brown and writer Simon Ford. 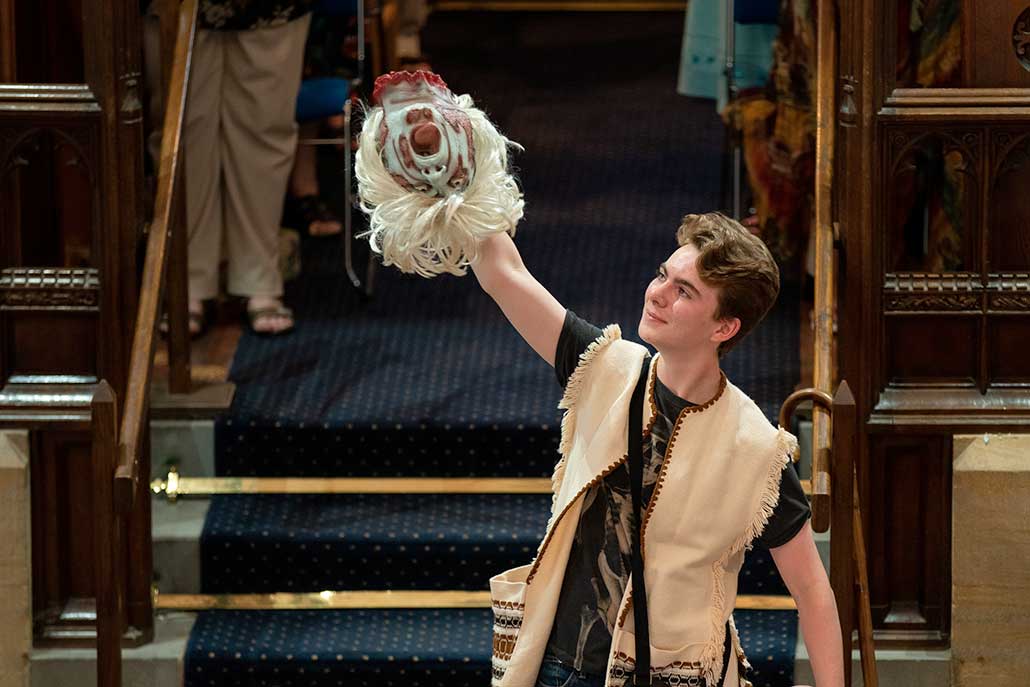 Fishpond Bottom residents to open gardens in aid of church

AS lockdown restrictions ease, the small community of Fishpond Bottom, near Lyme Regis, will finally be able to open their gardens to the public in a bid to raise much needed funds for the village church church. […]

WITH regular airplay on one BBC Radio 2 and BBC 6music, it is no surprise that The Simmertones are often named as one of the UK’s biggest ska and reggae acts. […]

MELODIC saxophonist Neil Maya and South African born pianist Philip Clouts will be playing catchy tunes which lift the spirits on Sunday, February 25th as part of the Marine Theatre’s popular ‘Jazz in the Bar’ series. […]