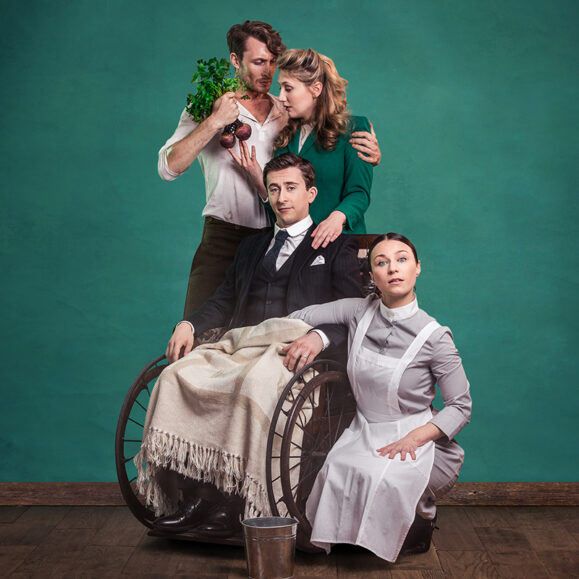 HAPPY Idiot Productions present a dark comic parody of the famous D.H. Lawrence novel, as ‘Not: Lady Chatterley’s Lover’ comes to the Marine Theatre in Lyme Regis on Saturday, November 3.

Lady Chatterley welcomes home her husband, Clifford, from a war that has left the world in tatters. With Clifford’s legs also in tatters, he arrives at Wragby Hall confined to a wheelchair and clutching his secret.

As the couple grow apart, Constance falls into a passionate, sexual and curiously experimental affair with estate gamekeeper, Mellors.  There will be long, contemplative looks into the middle distance, moments of touching drama, plenty of farce and a gentle stroke of innuendo.

Think ‘The Naked Gun’ and ‘Airplane!’ mixed with a steamy costume drama in this laughter-filled parody of the D.H. Lawrence classic.

The play has been adapted by Lawrence Russell, who also stars as Clifford Chatterley in the show. He is joined on stage by Christina Baston as Lady Chatterley, Wesley Griffin as Mellors and Rebecca McClay as Mrs Bolton.

Discussing the play, Lawrence says: “’Not: Lady Chatterley’s Lover’ is a quintessential British novel which – over the years – has been adapted for film, TV and stage so I felt it was due time for a new take on the classic.

“The key points of the novel are in there, but of course there are a few twists to draw out to highlight the comedy. Our production will keep the pace fast and adapted to work brilliantly with our strong cast of four.

“Ultimately our goal is to entertain with the intention of leading the characters to the point of touching drama and then nudging them into a puddle!”

Expect high drama, high comedy and highly raised eyebrows in what will be a fantastic show for both those who know the novel and those who are experiencing it for the first time.

View the trailer for ‘Not: Lady Chatterley’s Lover’ below:

WITH more than 150 events annually – including cinema, concerts, plays, and screenings – a ticket to every show at the Marine Theatre in Lyme Regis for a year was always going to prove to be a very popular prize. […]

SHAKESPEARE’S comic masterpiece ‘As You Like It’ is to be broadcast live from his hometown of Stratford Upon Avon to the Marine Theatre in Lyme Regis. […]

Murder mayhem at the Marine

WITH the Marine Theatre enjoying sell-out audiences with its programme of top end entertainment to suit all tastes, it is good to see that the bastion of seaside theatre – amateur dramatics – is still thriving in Lyme Regis. […]