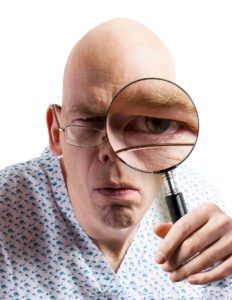 ‘FORGET Me Not – The Alzheimer’s Whodunnit’ is the multi-award-winning creation of Leicester-based comic, poet and psychiatric nurse Rob Gee.

This winter, following a sell-out tour across Canada, Rob heads to Dorset to perform the show three times through Artsreach, the county’s touring arts charity.

Jim’s wife, a patient on a dementia ward, has died from what appears to be natural causes. Jim is a retired police detective and he smells a rat and he’s determined to solve one last murder. The problem is, he also has dementia. It is a case worthy of the greatest detective mind, but his will have to do…

Rob Gee spent 12 years working as a registered nurse in inpatient settings around the UK and Australia, before becoming a writer, poet and performer. Alongside regular appearances on BBC Radio, Rob has gone on to perform with the likes of Jo Brand, Sarah Millican and Jimmy Carr, and has won over twenty international awards for his solo shows.

Rob based ‘Forget Me Not’ on his experiences as a nurse on a “challenging behaviour” ward for people with late stage dementia.

He said: “I was there as a student nurse in this really bad ward around 20 years ago and I left under a bit of a cloud after reporting what I saw.

“Much has improved since then, but the people with the worst memories are always at risk of being the most forgotten about. I also wanted to write a rattlingly good murder mystery and I didn’t think these two things were mutually exclusive.”

With hilarious and thought-provoking turns, this is a one-man comedy poetry theatre show with a lot to say about how we treat and perceive people with dementia. So much so that, since seeing it, the NHS have now recruited Rob to use the show for training clinical staff on ethics and reporting concerns.

Catch this fiercely funny yet heartbreaking show in a matinee performance at St Andrew’s Community Hall, Charmouth, on Sunday, December 1 at 3pm.

Tickets, including tea, coffee and cake, are available by calling 07967 759 135 or visit www.artsreach.co.uk, where details on other dates across Dorset are also available. Suitable for ages 14+.

Fantastic family theatre for half term

WITH captivating storytelling, live music and stunning puppets – plus a chance to get hands on with recycled puppet-making workshops – three family productions will be visiting venues across Dorset this February half term. […]

‘Romeo and Juliet’ broadcast to the Marine Theatre from Stratford

A LIVE screening of the Royal Shakespeare Company’s production of ‘Romeo and Juliet’ will be held at the Marine Theatre in Lyme Regis on Wednesday, July 18. […]

Murder mayhem at the Marine

WITH the Marine Theatre enjoying sell-out audiences with its programme of top end entertainment to suit all tastes, it is good to see that the bastion of seaside theatre – amateur dramatics – is still thriving in Lyme Regis. […]