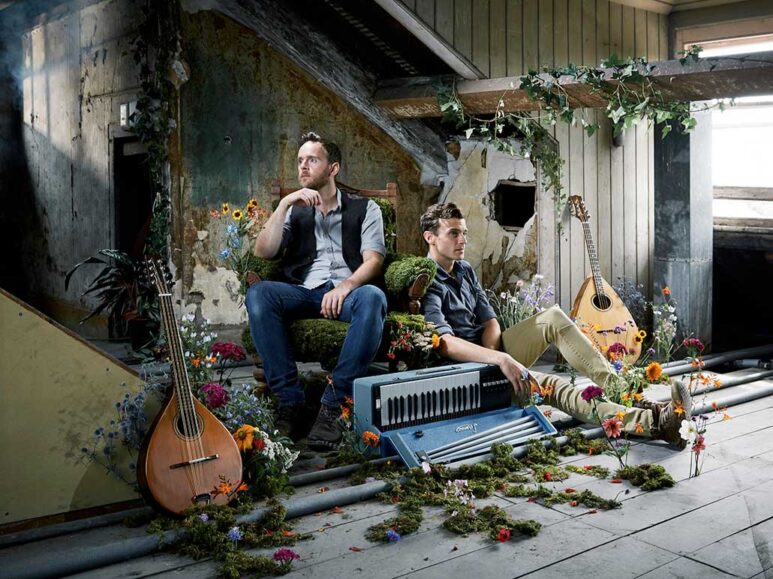 FOLLOWING a sell-out performance at Lyme Folk Weekend, the multi-award winning duo Ninebarrow, otherwise known as Jon Whitley and Jay LaBouchardiere, have announced they will be returning to Lyme Regis for their first concert of the new year.

Ninebarrow are a multi-award-winning folk duo, who are impressing audiences across the country with their innovative and captivating take on the folk tradition.

Described by Mark Radcliffe as sounding “like two halves of one voice” and by Kate Rusby as “absolutely amazing”, Jon Whitley and Jay LaBouchardiere combine breathtaking vocal harmonies and melodies, delivering original songs that are inspired and rooted in the landscape and history of the British Isles.

As well as crafting unique and engaging original material, Ninebarrow also take a wide-range of traditional folk songs and rework them in their own, distinctive way.

In 2017, the duo were nominated at the BBC Radio 2 Folk Awards for Best Emerging Artist.

Named after Nine Barrow Down in the Purbeck hills, their first release ‘While the Blackthorn Burns’ was voted FATEA Magazine’s Best Debut Album of 2014, while their last album, ‘Releasing the Leaves’, saw a volley of critical acclaim including five-star reviews in Maverick and EDS Magazine as well as Best Duo nominations in the FATEA and Folking.com Awards.

It is the multi-award-winning duo’s modern and inventive take on the folk tradition that seems to be captivating audiences across the country.  Not only exceptional singers and musicians, they are also equally passionate about the stories behind their songs.

A live session on BBC Radio 2’s Folk Show, described by presenter Mark Radcliffe as “immaculate”, has lead to a string of sell-out shows across the UK.

MELODIC saxophonist Neil Maya and South African born pianist Philip Clouts will be playing catchy tunes which lift the spirits on Sunday, February 25th as part of the Marine Theatre’s popular ‘Jazz in the Bar’ series. […]

Music fills the town as B Sharp returns with Busking Festival

MUSIC could be heard all along the seafront as B Sharp’s Busking Festival returned to Lyme Regis earlier this month. […]