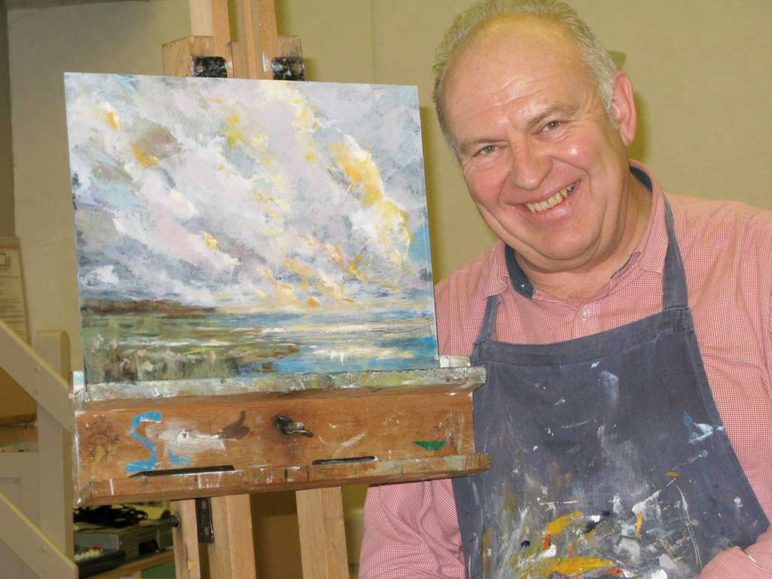 ARTIST Matthew Davison believes in audience participation in his demonstrations, and Lyme Regis Art Society members were quick to take him up on it.

He asked what members would like him to paint  and was told “a wintry-grey sea under a stormy sky, with a sunset”.

With the task set, Matthew quickly got to work, talking members through every paint stroke, whilst filling in details of his fascinating life. For a long time he was a film cameraman so observing and working with different light conditions became second nature to him.

He then tried watercolour work but missed being able to use a white pigment and only really became interested in painting when he began using acrylics and discovered white paint.

Matthew uses zinc white when mixing colours but always titanium white to give strength and drama to brightly lit areas of his work. He also uses lots of household painting horsehair brushes to give texture and copies of The Yellow Pages for wiping his brushes on.

He offered members many useful tips; a mix of viridian and alizarin crimson with zinc white and a touch of cadmium yellow makes an excellent grey; a spray of water on his board keeps the acrylic paint moist and malleable, and spraying the brushes stops them hardening; and always paint the edges of your picture as you go to save trying to re-create colours at the end.

Meanwhile, the picture gradually took shape as layer on layer of thin paint built up a sky to rival the real stormy sunset outside the hall.

Matthew’s demonstration was followed this month by a visit from artist Warren Madill, so talented that museums and art galleries employed him to paint perfect copies of important paintings, often for owners who find insurance fees too exorbitant.

He modestly showed examples of his work after giving a talk to members of Lyme Regis Art Society last week, including some of his commercial pieces such as Guinness’ famous toucan advert.

His main talk, however skimmed through the changes in the concepts and styles of artist expression, from cave paintings to current thinking, illustrated by beautiful images.

Warren defined art as a set of skills which produce a work capable of provoking an emotional response in the spectator, but to do this the artist has to use accepted conventions such as language to convey this concept. He also reminded members that many paintings and statues represented an idealised version of the original subject.

Members described the event as “a thoroughly interesting talk leaving much food for thought”.

Warren’s talk followed the art society’s annual general meeting. All members would like to thank the committee for their hard work over the year and, especially Sheila Stratton, who is stepping down as secretary, for all her time and dedication over many years.

She will be replaced by Sue Hodgetts and members are urged to visit the new website which she has developed for the society.

Lyme Regis Art Society meets on alternate Tuesdays in the Woodmead Halls from 2pm to 4pm until the end of March.

The next demonstration after the Christmas break will be on January 7, when Greg Wellman talks about ‘Secret Places in Lyme – painting those places which other people miss’.

MEMBERS of Lyme Regis Art Society are preparing for their annual exhibition – the highlight of the club’s calendar and the culmination of members’ efforts over the past 12 months. […]

LYME Regis Art Society members were given a treat last week when Dorset-based artist Joan Scott created a semi-abstract painting inspired by a harbour view of the Cobb. […]