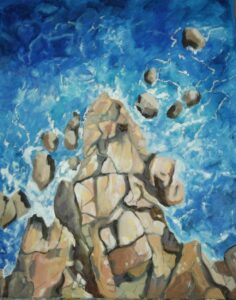 Fascinated by this rocky coastline, Leon was determined to find a less figurative and more authentic response to its unique mixture of Mesolithic geology, quarrying, natural rock fall and erosion.

Form was for him the dominant feature, and colour would be minimized to black, white and brown, with the blues behind changing with the weather and the seasons.

Explaining his process, Leon said: “Once decided on a particular view I try to let the painting take its own course in response to the rock, rejecting all influences encountered in my last 50 years of painting.

“The texture of the rock varies greatly, as does the size. Sometimes an enormous slab can be revealed at low tide with a small beach below of a mixture of large boulders and smaller pebbles.

“The surface of a slab can be pitted with potholes, or smooth where a constant flow has done its work. Caves and arches have seemingly been gouged out and channels carved into the land.

“Some areas have masses of smooth, stark white slabs and boulders; some cliff faces are made up of a threatening dark brown series of horizontal layers – each of these demanding a different reaction from the viewer and painter.”

Not surprisingly, Leon found that each coastal visit provided a unique experience.

As he puts it: “Sometimes the sea roars and throws white spume high into the air as it hits the rocks. On other days there can be a stillness and mirror-like sea surface in bright sparkling sunshine.

“Always there is an hourly change in the shape of the cliffs as the tide climbs its way up, hiding prominent features which are revealed again later in the day.

“All these factors affect the way I have approached each painting – more than 20 times in the last year – and the evolution of my approach can be discerned as the work in my exhibition is arranged chronologically.”

‘Portland Coast’ will be open at Lyme Regis Museum daily from 10am to 5pm, and on Sundays from 10am to 4pm. Admission charges apply and more information is available at www.lymeregismuseum.co.uk

THE Malthouse Gallery at the Town Mill in Lyme Regis will once again host artwork by students of the Woodroffe School for their annual exhibition.  […]

‘WATERLINE 2022’, the second collaboration between two like-minded local artists, Tricia Scott and Lois Wakeman, is a fascinating exhibition of contemporary abstract photography that features the weathered and textured surfaces of boats.   […]