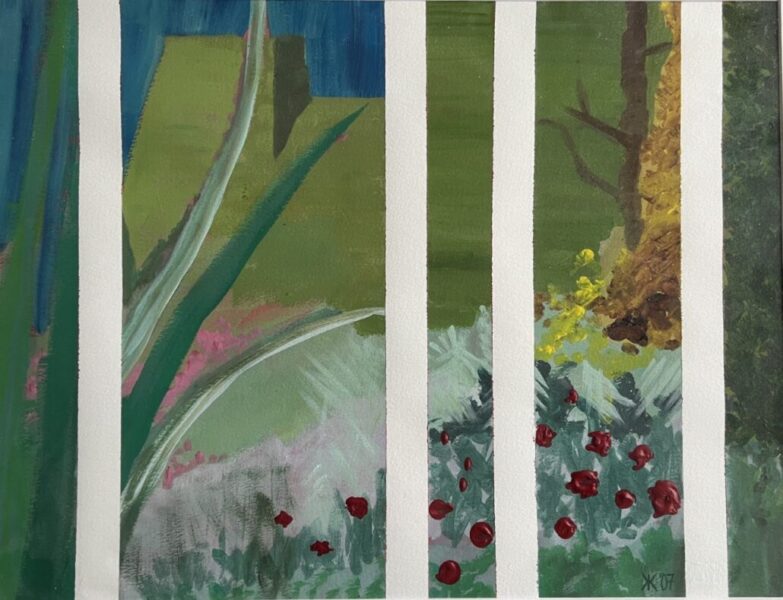 Having organised art exhibition at Lyme Regis Museum’s Rotunda Gallery for many years, celebrating the talents of dozens of South West artists, she has now taken this opportunity to share her own paintings and writings with the museum’s many visitors.

Her exhibition ‘ A Lifetime of Different Identities’ opened earlier this month and will continue at the museum until July 24, open Tuesday to Saturday from 10am to 5pm, and Sundays from 10am to 4pm.

Speaking of her ‘many identities’, Karol said: “An American raised in Los Angeles, I came to the UK in 1969 and have been here ever since.

“My first identity was as a film historian and lecturer, having attained a BA in film at UCLA and a Postgraduate Diploma at the Slade School of Fine Art’s film unit, UCL.

“After turning my diploma thesis into a book, ‘Alexander Korda: The Man Who Could Work Miracles’ (1976), I ran for five years the library and student film distribution at the National Film and TV School in Beaconsfield.

“My second identity was as a film trade fair organiser. From 1981 until 1986, I devised and ran the London Market, an international trade fair for the buying and selling of films and TV programmes, and then worked for six years as market director of Euro Aim, an EU initiative based in Brussels which organised the presence of European independent producers at trade fairs around Europe like the Cannes and Berlin Film Festivals.

“In 1996, I returned to my first love by becoming head of training at the Mauritz Binger Film Institute in Amsterdam, but a new interest in archaeology led to my studying the subject at a night class and eventually in 1999 to my focusing solely on my third identity as an academic archaeologist.

“I received a PhD in Archaeology from the University of Southampton in 2005, my thesis being about ‘public archaeology’, about how archaeology is represented in the media, thus bringing two of my identities together.

“‘Painter’ became my fourth identity.  I started painting in 1990, mainly landscapes in watercolour, then acrylics, oil pastels and even stained glass.  These media encouraged me to develop the more abstracted style that you see in my work on display here.

“I tend to work from my own photographs and have been inspired by famous gardens in Kent and haunting archaeological sites in the Orkneys.

“My fifth identity developed after moving to Lyme Regis and is the one most locals will know me for: event organiser and publicist.

“From 2008-2014, I co-organised the annual Lyme Regis ArtsFest with Christine Allison. In 2011, I coordinated a year-long celebration of the maritime life, culture and heritage of Lyme Regis, called the ‘Year of Maritime Lyme’, in collaboration with Lyme Regis Museum, and for the past seven years I have publicised the exhibitions that Town Mill Arts, later Lyme Bay Arts ran at their galleries.

“Since 2019, I have focused on curating and publicising the exhibitions that take place in the space you are standing in now, the Rotunda Gallery.

“Another seven artists will be exhibiting their work here after my show comes down, so please do return to see more of the work done by local artists.”

THE Malthouse Gallery at the Town Mill in Lyme Regis will host ‘Diana and Actaeon’, a unique and engaging collection of paintings by Devon-based artist Kate Westbrook that has been specially curated for the gallery by The Art Room’s Deborah Wood. […]

Museum to host art exhibition as it reopens doors

LYME Regis Museum will be reopening for the first time in six months on September 8, and one of its first events will be an art exhibition in the Rotunda Gallery.  […]

POPULAR local artist Julie Oldfield returns to the Malthouse Gallery at the Town Mill in Lyme Regis, with her inventive and atmospheric mixed media paintings that are weathered by time, the sea, oxidation and chemical treatments in order to create texture as well as capture coastal light and mood. […]