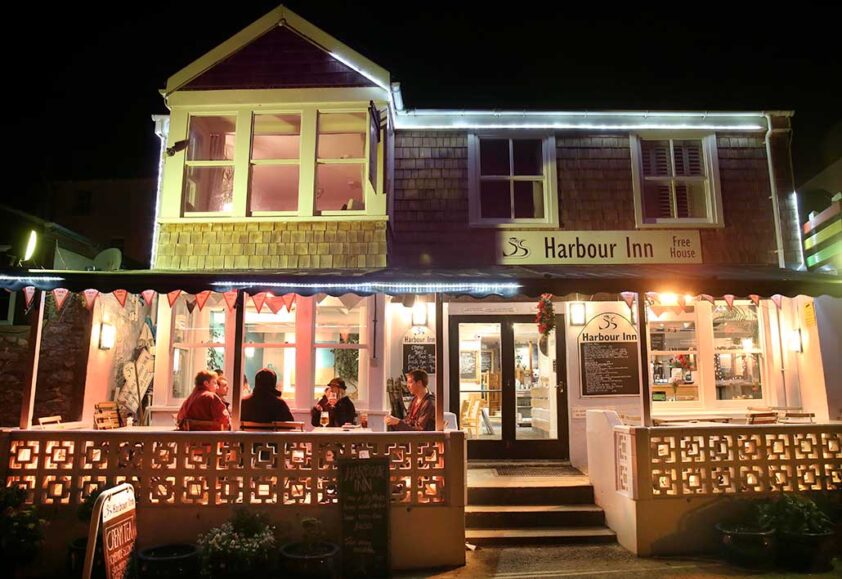 SITTING on the veranda as the sun goes down, sipping a chilled Chablis with the sea lapping over the sandy beach just a few steps away, you could be in any trendy bar in some exotic holiday location.

But this is the Harbour Inn in Lyme Regis – trendy in its own right with a plethora of new eating out venues opening in recent times – where owners Sue Steward and Mark Oldfield are preparing to celebrate their 15th year in the resort and whose reputation has done much to establish Lyme as a must-go-to food destination.

Before flying off for a two-week break in Sri Lanka, ahead of another hectic summer season, Sue and her staff have been giving Lyme’s most popular seafront restaurant and bar a refreshed look.

Adding a very special touch, the bar and restaurant walls are adorned with an array of spectacular works by Sue’s artist daughter, Julie Oldfield, currently displaying her unique paintings on metal at the The Malthouse Gallery at the Town Mill until April 3.

Before acquiring The Harbour, after moving to the West Country from Derbyshire in the 1990s, Sue bought the Honiton Wine Bar, which was run by son Mark, as well as taking over the Awliscombe Inn.

The Harbour was a pretty tired seaside pub when they took it over in 2004 and, over the years, they have extended the premises, adding a restaurant, maximising the attractive veranda and securing a sitting out area on the beach which is literally just a few steps from the bar.

Sue and Mark soon recognised that their position so close to the sea was their greatest asset and set about building their restaurant trade, gaining a reputation over the years for good quality cuisine at reasonable prices, using local ingredients, especially fresh fish right off the harbour trawlers.

That reputation is still as strong today despite the increase in competition from new food outlets in Lyme in recent years.

For many, The Harbour is still the favoured location for celebrating big occasions and events and some of their dishes, especially Sue’s very own fish pie, have near iconic status.

Occasional music nights at The Harbour are always popular with its close proximity to the beach and the bar is a regular haunt for the seafaring fraternity, including the unofficial watering hole for Lyme Regis Gig Club.

Special menus are also prepared for specific events such as Valentine’s Day and Burns’ Night but Sue and her staff consider those who just want to take in the seaside atmosphere and enjoy a drink on the veranda, or in the sitting out area, just as important as those enjoying their meals in the restaurant.

Sue said: “We have a loyal clientele but we are conscious that there is increasing competition in the hospitality trade in Lyme Regis and to celebrate our 15th year in the town we have redecorated the bar and restaurant and will be launching a new menu as Easter and the summer approaches.

“We are really grateful for the support we have received from the people of Lyme and we look forward to serving them and our visitors for many years to come.”

Sue also paid tribute to her staff, around 36 of whom are employed during the season, and also the creativity and skill of her chefs.

FOR 172 years the Melplash Show in West Bay, Bridport, has been celebrating the best of agriculture by the sea. […]