Philip Evans explains how his love of French cuisine started… 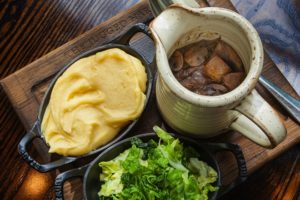 MY introduction to French cuisine could not have been in more simple circumstances.

In the early 1980s, when I was still playing football, Lyme Regis were invited to play at match in the Normandy village of Creully, one of the first villages to be liberated after the D-Day landings. Few of us has been abroad before and none of us had been to France or had any knowledge of the great culinary reputation of Normandy.

Little did we know or expect that first visit to lead to the great relationship our club has enjoyed with our French counterparts and that so many friendships would be established which have endured the last 36 years.

Our first taste of French cuisine was hardly Raymond Blanc-standard. We had arrived late afternoon on the Friday, having stopped en-route for a drink or three after a pretty boozy ferry crossing.

I travelled with my leg in plaster after breaking my ankle the week before in the Axminster Hospital Cup and was billeted in the local bar, The Renaissance, run by your archetypal French bar tender, Moustache, so that I did not have to walk too far.

This being the 1980s, the Renaissance bar was not the most salubrious joint I’ve ever been in. We were never short of a full glass but the menu was a bit limited to say the least. So the first sustenance we really had came from a barbecue after the game on the Saturday, by which time I was starving.

As is the French style, the steak was so raw it looked like it had been fleetingly passed over a mild flame and there was a steady procession from the English to the barbecue for their steaks to be given “a bit longer” The French looked at us with incredulity.

Moustache found his chef’s apron on the Sunday and served up a pot of jugged hare, which none of us had heard of, let again tasted.

A traditional dish known in France as “civet de lievre”, I discovered later the hare was marinated and cooked with red wine and juniper berries in a tall jug that stands in a jug of water, served with the hare’s blood added at the end of the cooking process.

None of us spoke French and our hosts only had a few words of English so we really did not know what we were eating – probably just as well.

On subsequent visits to Creully we came to appreciate the wonderful hospitality offered by the villagers and the fantastic feasts that have been laid on for us, washed down of course with buckets of Calvados, the lethal apple brandy and the signature tipple of Normandy.

In subsequent years, especially when I was the club chairman, I was fortunate to stay with one of the founders of the twinning arrangement between the clubs, Michel Longuet, who was made a Life Member of Lyme Regis FC, as I am, for his efforts in getting the association between the two clubs off the ground and supporting it ever since.

Michel’s wife, Marie-Francoise, was also a prime mover in the early days and is, without doubt, the best chef in the whole of Normandy (well, at least Creully). Unlike the English way of life, a meal in France is a real family occasion. No sitting around the TV with a tray on your lap for our Gallic friends.

The official reception which is now an important part of our gatherings, both in Creully and Lyme. In Creully such occasions are held in their magnificent 12th century chateau, which is where the BBC based their coverage of the invasion of Europe after D-Day. The tables overflow with very best of local produce, seafood like you’ve never seen and the finest charcuterie.

We always feel we struggle slightly to reach such culinary heights when we entertain our Creully friends in Lyme, not that the French would subscribe to that view. They usually stop on the way to Lyme for fish and chips in Bridport and they rarely turn their noses up at a traditional full English breakfast.

It’s a unique arrangement in English and French football – and it all started with that simple barbecue in a football field in France where men from this country, including former Lyme footballers, laid down their lives so that others might enjoy the simple freedom of sharing their cultures.

*After reading my first My Life In Food blog one of my former employees who has spent some time in Australia, Ben Parker, expressed surprise I did not mention Australian cuisine as I had a worked for a while Down Under. One thing that stands out in my memory is how popular pies were with the Ozzies

I pretty much lived in an hotel in Brisbane where there was a fine restaurant but I recall enjoying a spectacular meal when I was treated to a weekend at a resort in land to celebrate my birthday. It was during the winter and there were very few guests staying at the hotel – in fact just me and four Japanese girls.

I also made a number of visits to South Africa where one dish stood out – warthog pie. The meat was very similar to pork but much sweeter,  but I have never seen it on any other menu since.

If you run a food or drink establishment and are interested in being featured in our review section, call Philip Evans on 07796 951 991.

ORGANISERS of the annual Food Rocks festival in Lyme Regis have announced that this year’s event raised a record £11,191 for charity.  […]

Lyme Regis Sausage & Cider Festival to be held in July

LYME Regis Football Club has announced it will be going ahead with its popular Sausage & Cider Festival on Saturday, July 3. […]

THE team at seafront restaurant Tom’s in Lyme Regis are celebrating after being awarded an AA Rosette after just over a year of trading. […]