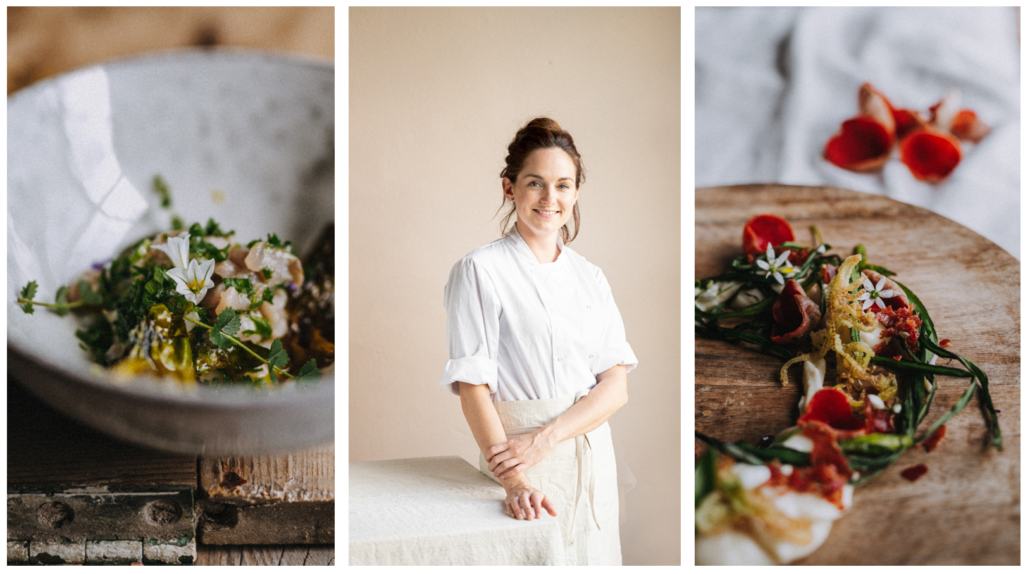 Originally from Sidmouth, Harriet competed in the BBC’s ‘Great British Menu’ earlier this year, and is now making the final touches to her permanent Robin Wylde restaurant in Silver Street, just a few doors from its original home.

With a philosophy embedded in celebrating the diversity and abundance of West Country produce, Harriet will bring Robin Wylde to life once more – but this time the restaurant is here to stay, set to open in former pottery workshop Whoopsadaisy later this month.

As inferred by its namesake Robin Wylde – a pseudonym which evokes connotations of luscious and wild countryside combined with a sense of adventure and old English charm – Harriet’s culinary style takes inspiration from the natural world.

Experimentation with raw ingredients, to include pickling, preserving and fermentation, also play a prominent role in Harriet’s recipes.

Harriet opened the original Robin Wylde pop-up in April 2019, which was a sell-out for its entire six-month residency at The Pop-Up Kitchen in Broad Street.

As word of the Robin Wylde experience spread through Dorset and beyond, only six weeks after opening Harriet was asked to take part in the 2020 series of the BBC’s ‘Great British Menu’, where she competed in the South West heat.

In a similar style to its first incarnation, the restaurant – which will seat up to 32 covers – will provide a nine-course tasting experience, alongside optional pairings of low intervention and West Country wines.

Highlights from previous menus include dishes such as celeriac with hazelnut, cured egg yolk and Dorset truffle; baked River Teign oyster with wild garlic and apple; and gooseberry mousse with butterscotch.

Drawing on the West Country’s enviable array of natural ingredients and producers, the menu – which will change approximately every six weeks – in particular will shine a light on the region’s world-class seafood, incredible locally-grown produce that benefits from the southerly climate, sea herbs and seaweeds and more.

Alongside its wines, Robin Wylde will offer diners a broad selection of other drinks to include ales, ciders, spirits and meads.

Harriet’s career in the food world began at a young age, propelled by her first job at a fruit and vegetable store. Working various part-time restaurant jobs through her teen years, after graduating from Cardiff University in politics and history, she completed her Cordon Bleu culinary training.

Harriet’s first job in a professional kitchen saw her working for fellow West Country chef Mark Hix, at his London-based Champagne and Oyster Bar in Selfridges.

In 2014, Harriet began a three-month stage Noma in Copenhagen – an experience which opened her eyes to a whole new world of flavour and ingredients. Following this she completed a couple of stints in high-profile London kitchens as well as a brewery, whilst also working towards her qualifications as a sommelier.

The next five years saw Harriet work on some of the world’s most prestigious superyachts, where she cooked on board vessels in the Mediterranean, the Caribbean and the Seychelles for clients such as the Qatari Royal Family and the Murdochs.

In early 2019 she returned to the UK to begin Robin Wylde in its first inception at The Pop-Up Kitchen, and last October Harriet began drawing up plans to make it a permanent venture, which is now becoming a reality.

Bookings lines will open around the first week of September and tables can be reserved up to three months in advance at Robin Wylde, 63a Broad Street, Lyme Regis.

The full Robin Wylde tasting experience is priced at £60pp + £45pp for the optional wine pairing. Dietary requirements are catered for.

WORK has recommenced on the refurbishment of the Rock Point Inn in Lyme Regis this week, with hopes that it will be ready to open on July 4. […]

FORMER River Cottage head chef Gill Meller will be hosting a one-off lunch as part of a series of pop-up dining events being held at a wildflower farm in East Devon. […]