SINCE opening her first pop-up restaurant in Lyme Regis in 2019, Harriet Mansell has continuously proved herself as one to watch in the South West culinary world.

Growing up in Sidmouth, Harriet developed an interest in food while working her first job in a fruit and vegetable store. She spent her teen years working in hospitality and completed her Cordon Bleu culinary training after a degree in politics and history.

Harriet’s first job in a professional kitchen saw her mentored by fellow West Country chef Mark Hix, at his London-based Champagne and Oyster Bar in Selfridges.

She went on to work in a number of high-profile kitchens in the capital while training as a sommelier, and enjoyed five years cooking on board some of the world’s most prestigious super yachts.

In 2019 she returned to the UK to launch the first inception of her own restaurant, Robin Wylde, at The Pop Up Kitchen in Lyme Regis.

Its success was phenomenal and, as word spread through Dorset and beyond, just six weeks after opening Harriet was invited to take part in the 2020 series of the BBC’s ‘Great British Menu’, competing in the South West heat.

In October 2021, the opportunity arose to open a new, permanent home for Robin Wylde in Silver Street, but it was not an easy start.

Just a week after opening, the country was thrown into a second national lockdown amid the pandemic, and Harriet was unable to access furlough for her staff.

Over the challenging months that followed, she vocally spoke out in the local and national press about the need for more support for the hospitality industry and new businesses.

But since being able to reopen, there has been no stopping Harriet and her team.

Not only has Robin Wylde become one of the most sought after bookings in town, Harriet went on to open her second business – restaurant and wine bar Lilac – in a renovated 400-year-old cellar on Broad Street, in July 2021. 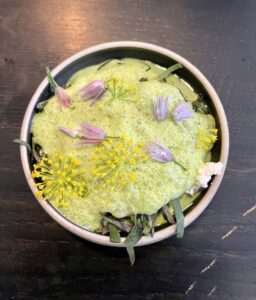 Both restaurants employ a diligent waste reduction ethos with a focus on quality, vegetables, seasonality, locality, and substantiality.

Showcasing ingredients from the best South West suppliers and producers, the team also forage the local coast and woodland for wild ingredients and botanicals to add to their kitchen pantry. 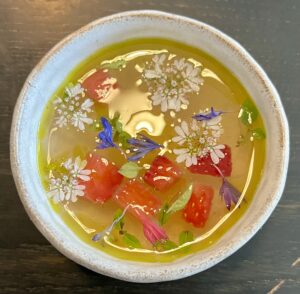 This was followed by homemade bread and butter served alongside local oysters with beach mustard and herb Robert, a fish course of John Dory, elderflower and gooseberry and delicious main of lamb with English rose harrissa and smoked yoghurt.

The dessert course of white chocolate, strawberry, ground ivy and mint granita was possibly the best pud I have tasted.

From start to finish the menu was fresh and flavoursome, featuring unusual ingredients and combinations expertly explained by Harriet’s passionate staff, and paired with wines that took us on a journey from England to Germany, Spain, Italy and France.

Harriet’s imaginative menus have not gone unnoticed in the culinary world. 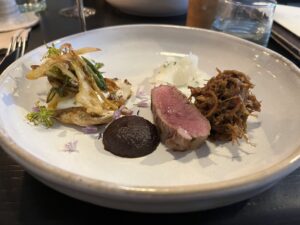 In March this year, both Robin Wylde and Lilac were included in the much-esteemed Michelin Guide 2022, and Harriet was last month named Best Chef in the Food Reader Awards 2022, championing the South West’s best independent food and drink businesses, at a ceremony at Winslade Manor, near Exeter.

Alongside Harriet, other finalists included The Oyster & Fish House in Lyme Regis for Best Restaurant, owned by one of her first mentors in the world of food, Mark Hix MBE.

Fellow Pop Up Kitchen alumni The Monmouth Pantry reached the final of the Best Indie Retailer Category, and River Cottage, near Axminster, was a finalist in the Sustainability Champion category.

LYME Regis Town Council has had a fractious relationship with the hospitality trade in Lyme Regis for many years. […]

MORE work may need to be done to help residents out of food poverty, a council committee has been told. […]

With its old-school charm and superb service, the Royal Lion Oak Room excels

WHEN I first started out as a reporter, at the tender age of 17, local newspapers covered virtually every event that took place. And in those days that meant attending every annual dinner and dance which necessitated me having to buy my first dinner jacket whilst still a teenager, which all my mates thought was a bit odd. […]