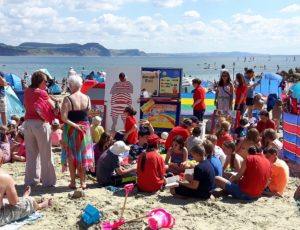 IN response to the letter from Diana Hunt (LymeOnline, December 17) defending the United Beach Mission and the role this organisation plays on our beach, I would like to say the following.

The UBM is a fundamentalist organisation which strictly adheres to the Bible (it is “fully trustworthy as originally given and is the unerring revelation of God” according to the UBM).

It does not believe in evolution, thereby believing the planet to be circa 6,000 years old which does not easily align with Mary Anning, etc. and which is at direct odds with school teachings and basic science.

Amongst many other rigid beliefs (stated on their website if you dig about a little), it strictly believes in “the eternal blessedness of the righteous and the eternal punishment of the wicked”.

Such strong and unforgiving words and yet it dresses itself up as some child-friendly fun club with activities such as tug of war, sand modelling, smugglers trails, beach volleyball, etc.

I have walked past the UBM on the beach over many years with my own children and I don’t like the fact that it doesn’t properly state its fundamentalist beliefs so that parents understand what is being “taught” to our children when they are left in UBM’s care.

The fact that it has been allowed to preach such strict beliefs on our beach for 50 years does now, in my opinion, seem outdated when we inhabit a world which is in need of unification rather than further division.

I am not a Christian but I don’t believe that the beliefs of the UBM are reflective of modern Christianity. However, I would be interested in hearing the views of the local churches on this.

Its free licence to preach, granted by the town council, expires in 2022 and I agree with James Burtoft (LymeOnline, December 10) and with Carl Salter (LymeOnline, November 26) that this licence should not be renewed.

WORK to re-level Lyme Regis beach after stormy seas washed away a large quantity of sand have now been completed. […]

THE town council has said it is investing more resources into keeping Lyme Regis seafront clean and tidy during the busy summer season.
[…]