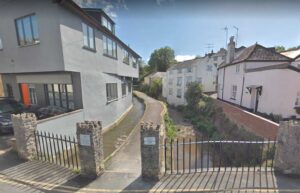 WHEN trying to determine the correct spelling for the river we need to remember that for centuries phonetic spelling with numerous variations was the norm.

In 774 the river is clearly recorded as the Lim, however in the 10th century the town is described as “being by the river Lym”. Early sea charts denote the town and port as Lim or Lime.

It has been suggested that Lim means a “raging torrent”.

In one early document both spellings are used; Lym is depicted as being close the “Saltforde” (near the old Uplyme Mill) with the River Lim entering the sea at “Lyme Abbots”. The Doomsday Survey refers to the Bishop of Salisbury holding land at Lym.

Whichever way you spell it, the name remains constant. It would seem from the evidence that our town took its name from the river.

THIS week will mark 80 years since a German aircraft was shot down over Lyme Bay during the Second World War, watched by many on Lyme Regis seafront. […]

THE Boat Building Academy facing the Monmouth Beach was once the home of the above unit. Built in 1937 it consisted of barracks, boathouse and workshop, during construction the unit took over the 1884 lifeboat house as a workshop. […]