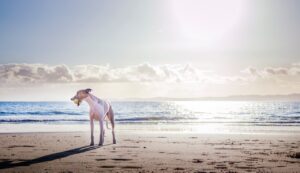 I’VE read with interest LymeOnline’s letters both for and against allowing dogs on the beach.

Those against naturally focus on a small minority of owners who do not pick up after their dog fouls. Well I agree, shame on them. However, this generalisation is overlooking a lesser known benefit that the majority of dogs and their owners are providing the town.

This afternoon I was on the beach with my dog, named Luna – a mini schnauzer (other local dog owners will know who we are). I watched her use her extraordinary sense of smell to track down, and then use her equally extraordinary appetite, to greedily devour half a bag of chips that someone had tossed away, all before I could stop her.

Then 10 minutes later I was picking up poo, as you do, bagging and binning it, and it suddenly struck me that actually we dog/owner teams are providing a pretty damn good beach clean-up service.

Anything edible is detected, hoovered up, internally processed (heaven knows what goes on in a dog’s stomach), to later emerge neatly compacted, packaged and deposited for the human owner to dispose of.

This is just one example of Luna’s devotion to duty. In recent weeks, as well as other discarded food (there have been similar chips incidents and even chewing gum – yuk!), she retrieved a dead fish from the water’s edge in the harbour (a dog fish, of course!).

That one she was particularly proud of, being nearly as big as her, and it took a very great deal of chasing, shouting and arm-waving to get it from her and place it out of harms way, in a bin.

All these tasty morsels would otherwise be seagull fodder. Luna not only removes their food source, but also chases them off if they’re daft enough to land anywhere close.

It’s not the just edible stuff though – bottles, food trays and other single-use plastics all get her attention and have to be confiscated, in exchange for a dog biscuit. I’m sure many other dog owners have similar stories they could share.

So, as well as an escalating seagull problem, can you imagine how much Council Tax could increase if dogs are banned from the beach? Wouldn’t we have to fund an army of litter pickers to do the job, or else face drowning in a rising tide of human waste?

A LOCAL businessman has alleged that Lyme Regis Town Council gave a “huge quantity” of Roundup weed killer – banned from being used on its own land – to neighbouring Axminster Town Council for free. […]

Last day of spring was more like Lyme in August

WITH this Mediterranean spell of weather continuing, yesterday – the last day of spring – saw the main beach at Lyme Regis reminiscent of a peak period day with one exception – none of the bars and cafés were open. That’s not to say there was no alcohol about. […]