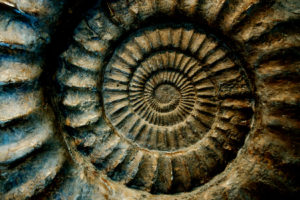 I HAVE been coming to Lyme Regis for half a century, like most visitors, to marvel at the wonderful ammonite fossils, both large and small, loose on the beach and in the cliffs. More recently to do some stone balancing.

For more than 30 of those years, the beach had hundreds of huge flat blocks with dustbin lid sized ammonites. I could return to the same spot year after year and be sure to recognise favourites that became almost friends. I was delighted that most visitors revered these wonders of nature and few tried to hammer, let alone remove them.

I took regular study groups in summer holidays and everywhere we quickly found coin-sized perfect white ammonites. Gradually I had to bring these forays forward to Easter and then to be able to find as many it needed a good winter storm.

Last week I struggled to find even a few, and all of the distinctive pebbles (the ones I know upon splitting will reveal these perfect fossils) also seem to have been removed by ‘collectors’! Whilst I have no problem with the few fossils that were taken away before this activity became so heavily publicised (and incidentally I made a point of returning some) there were always plenty for others to enjoy. Responsible collecting is fine but it needs to be promoted.

I have to say that my last trip to Lyme was absolutely ruined, not just by the lack of fossil abundance, but by the wholesales removal of rock. Gone even, were the huge blocks that I always felt were safe from their sheer size. I did come across two parties who were not only loading massive single blocks into rucksacks they could barely lift, one was engaged in what could best be described as quarrying – employing a sledge hammer, four foot long crow bars and a wheelbarrow!

Needless to say I could not find a single ‘old friend’ from Monmouth Beach. I could not even fine one of the comma-shaped stones I like to balance!

When challenged one perpetrator, near the famous Ammonite Pavement, informed me that no ‘collector’ would break this up, and the unsightly mess of broken fragments he had made would soon become rounded by the sea; which is also continually releasing fossils from the cliff. Well over centuries, this may be true, but like a discarded biodegradable banana skin the hammered mess will be an eyesore for some a time.

I am sorry, I am old enough to know first hand how long it takes for the sea to destroy the fossils, because for many years I could keep going back the same recognisable ammonites. At the same time erosion is making replacements far too slowly to keep up with this kind of selfish wholesale ‘collecting’.

It is disappointing that the existing £20,000 fine for removal of this significant geological heritage is nether enforced nor acts a deterrent.

COASTGUARDS have warned the public to stay away from cliffs in the Charmouth area, following a large rock fall yesterday (Monday).  […]

EXCITEMENT surrounding the filming of ‘Ammonite’ – based on the life of Lyme Regis’ famous fossil hunter Mary Anning – continues this week.  […]

LYME Regis Development Trust – organisers of the annual Fossil Festival – are hoping to to include young people from the local community in making artwork for this year’s event.  […]