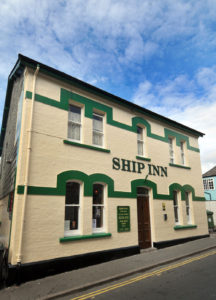 AN open letter to Palmers Brewery:

I WRITE to enquire about the state of play regarding the Ship Inn, Lyme Regis. I have been a regular customer at the ship for years, and have enjoyed the pub, and the beer which has been of excellent quality under Alan and Virginia Henson, an also under Dave Henson before that.

Being a pensioner, I tended to visit the pub at around 4pm with a friend for a much enjoyed pint or four, and occasionally a game of crib, and returning home with a meal from the fish and chip shop across the road.

Today I found the pub closed, and there are notices in the window telling me of the much limited opening times, and a sign saying that the pub would remain closed today due to staff shortages, also suggesting to go to the Pilot Boat around the corner.

I do have similar regrets of how the Pilot Boat has been redeveloped, but that I can live with, I’m old and prefer a quieter, more traditional pub, also I might add, with more modest drink prices.

The Ship has been just that – a comfy local, and the rumour I have heard is that a large amount of money has been put aside for its refurbishment. I sincerely hope that the pub will just get a ‘spruce up’, involving decoration, maybe some new seats, re-finish the beautiful mahogany bar counter, etc.

I also really do hope that you don’t rip it all out and turn it into another trendy modern gastro-pub. Lyme has plenty of those.

Especially I ask that you do not get rid of the skittle alley, which is now the only one in Lyme Regis, and caters for several skittle teams.

I do hope that you consider my requests, bring in a new ‘Guv’nor’ and re-open the place as a proper local for the likes of myself and many friends who also share my concerns.

My Life in Food: A rustic dining experience at Hugh’s River Cottage

FEASTING at River Cottage, Hugh Fearnley-Whittingstall’s farm-cum-restaurant-cum-culinary school-cum venue, on the outskirts of Axminster, is a real celebration of great food set against the glorious backdrop of Park Farm. As a dining experience, it would be difficult to find a more rustic setting. […]