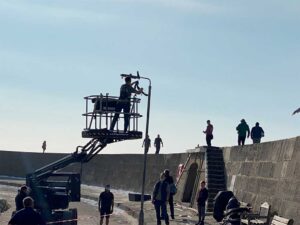 THERE, behind me, guided by two Warner Brothers crew, trundled a large black cherry picker, all ready, once in place, for the filming of ‘Wonka’.

So I came alongside and said to the crewman, why didn’t he help the Lyme community by using his machine to remove a horrid, torn black polythene bag from the top of the lamppost on the Cobb?

It had been there all summer and looked so messy that, like many others, I found it upset me and entirely spoilt the beauty of the harbour.

Two weeks before, I had asked a local council worker with his cherry picker mending a light on the prom, at the Church Cliff end of town, if he could take his vehicle and remove said polythene bag.

His reply was that his remit was to service the lights to the east of Lyme and my request was west, so the reply was “no” but he would tell his boss.

So thank you the kind gentleman who bothered to alleviate the problem by removing the bag straight away as he drove towards the film set.

However, it did become clear that it had not blown there in the storms but was probably put there by the council, tied in place to stop bits of broken light falling on people’s heads!

The latest issue of the LymeOnline newspaper with all your news, sport, entertainment and events from Lyme Regis, Uplyme and Charmouth, including a photo special on the filming of ‘Wonka’ […]

YOUNG fans of Timothée Chalamet were sent into a frenzy on Tuesday evening as the actor waved goodbye to Lyme Regis. […]

RUMOURS abound in Lyme Regis that one of the town’s iconic summer events, the yard of ale competition in Lifeboat Week, will not be held again. […]