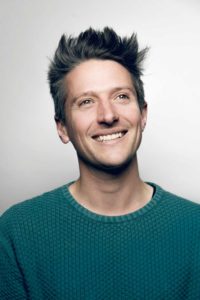 STUART Goldsmith, a “charming, expert stand-up” famed for ‘The Comedian’s Comedian’ podcast, is the headline act of the next Lyme Regis Comedy Club.

Stuart started his career as a street performer, moving on to stand-up comedy. In addition to his stand-up credentials, recent years have seen Stuart build a reputation as a highly skilled interviewer and engaging host.

Stuart is an Edinburgh Festival Fringe veteran. Having been introduced to the festival as a street performer originally, he has since performed seven solo shows at the festival and presented ‘The Comedian’s Comedian’ podcast at the Fringe three times.

Stuart’s critically-acclaimed 2016 show ‘Compared To What’ subsequently toured around the world. His new show, ‘End Of’, debuted to rave reviews at the 2018 Fringe, earning a recommendation from the British Comedy Guide as one of their best shows at the festival. It will tour the UK in 2019.

Dan Evans and Sandi Smith are also on the bill, alongside resident compere Tom Glover.

The comedy club will be held at the Marine Theatre in Lyme Regis on Saturday, January 19 with doors opening at 7pm for an 8pm start.

Bill Bailey gig sold out within the hour

THE comedian and multi-instrumentalist Bill Bailey is heading to Lyme Regis on February 7 for a special ‘work in progress’ show. […]

ACCLAIMED comedy duo Stiff and Kitsch bring their Edinburgh show ‘Adele is Younger than Us’ to the Marine Theatre in Lyme Regis. […]

Summer’s here, as if you didn’t know

THE new unisex toilets are open at last, the beach showers are actually working, the bunting’s up, the flower tubs are planted, the rubbish bins are being emptied regularly, the park and ride is running – from Charmouth Road at least – the streets have been resurfaced and the traffic jams in Broad have already hit warp-factor five. […]