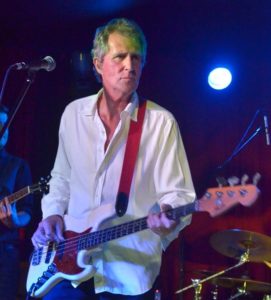 ALONG with Mark Knopfler, bass player John Illsley was a founding member of the legendary band, Dire Straits, who during their time together sold over 120 million albums.

He has announced a special evening at The Marine Theatre in Lyme Regis, which features a question and answer session and live music.

Featuring classics from the Dire Straits repertoire – and the Q&A led by ex-Dire Straits manager Paul Cummins – Illsley will be revealing the story and development of the band.

The story starts with the band’s humble beginnings in a South London council flat, where they crafted songs like Sultans of Swing and Wild West End, and leads into Dire Straits playing all over the world to a hoard of fans.

Ushered into the Rock and Rock Hall of Fame in 2018, Dire Straits’ sound draws from a litany of musical influences: jazz, folk, country, blues, and of course, rock. Their stripped down sound juxtaposed with the burgeoning punk rock era and demonstrated the band’s roots rock that emanated from the music of pub rock.

The band have worked with some of the world’s most influential, creative, and well-known musicians and producers.

John Illsley says of bandmate Mark Knopfler: “Having Mark as songwriter, singer and guitar player in the band gave Dire Straits it’s unique character. It was a pleasure for me to be able to contribute to the distinctive sound of the band, and enjoy the friendship and musical journey that Mark and I shared”.

During this special evening, Illsley will be sharing the stage with fellow musicians from his own band, who will be breathing life back into everyone’s favourites: ‘Romeo and Juliet’, ‘Money for Nothing’, ‘Brothers in Arms’, and ‘Sultans of Swing’.

This is an intimate and exclusive perspective into the life and times of, arguably, one of the biggest rock and roll bands of all time.

THIS month will see the return of the ever popular Lyme Folk Weekend, back for its eighth year and with a programme that once again puts the event at the forefront of folk events in the South West. […]

THE Marine Theatre in Lyme Regis will host a special concert of ragtime and rockabilly on handcrafted instruments by the Lym Delta Rhythm Kings. […]