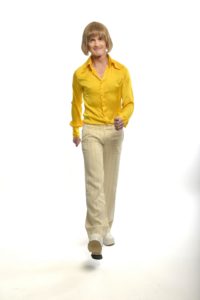 NO seventies record collection was complete without at least one album from the soft-rock duo The Carpenters.

Massive pop-hits such as ‘Close to You’ and ‘We’ve Only Just Begun’ made the siblings international stars who met presidents and played around the world.

Their success and hard-working lifestyle brought paranoia and difficulties, which are parodied by Matthew Floyd Jones in the sell-out spoof ‘Richard Carpenter is Close To You’.

Matthew is best known as the keyboard-playing half of Frisky & Mannish, the musical comedy double act beloved for their twisted pop versions. The duo’s first full-length show, ‘School of Pop’, was hailed in 2009 as the “undisputed hit of the Edinburgh Fringe” (The Herald) and the beginning of a “global phenomenon” (The Times).

The piano player from Frisky & Mannish plays the piano player from The Carpenters in a razor-sharp comedy play about a life spent playing the piano. Richard used to be on top of the world, to the left of (and slightly behind) Karen. Now he’s back with a vengeance, only to find out it’s not exactly yesterday once more anymore.

‘Richard Carpenter is Close To You’ will be held at the Marine Theatre in Lyme Regis on Friday, November 2 with doors opening at 7pm for an 8pm start.

SAM Kelly is a musician with more than 40 years in the business. His Station House band has been featuring on the UK music scene for many years, and has just announced a concert at Lyme Regis’ Marine Theatre. […]

BACK by overwhelming public demand, the New Jersey Boys will bring their hit show to Axminster Guildhall this September.  […]