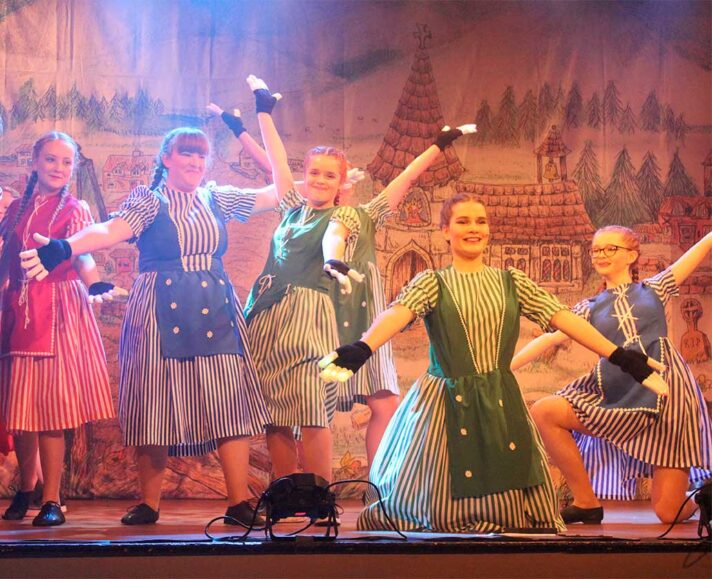 IT’S tradition for Lyme Regis Pantomime Society to bring down the curtain on their annual production with a rousing rendition of ‘Young At Heart’, first recorded by Frank Sinatra and then made even more popular in the 1980s by the British female trio, Bananarama.

‘Young At Heart’ has become their theme tune, summing up the youthful endeavour which is such a hallmark of all their productions.  Audiences have come to expect it.

For many who have trodden the boards in Lyme Regis and have become popular performers in the town, their first experience of stepping out on the stage came through the pantomime society. And that continues to this day, demonstrated in their recent Woodmead Halls production of ‘Hickory Dickory Dock’ featuring their youngest cast ever.

In her programme notes, producer/director Sarah Causley refers to this by saying: “These young people have proved themselves more than capable absorbing every piece of advice and direction given and working incredibly hard on bringing their characters to life.”

And in praise of the young chorus, she wrote: “What they lack in age, they make up in energy.”

That energy was very much in evidence in ‘Hickory Dickory Dock’ with the youngsters certainly stepping up to the plate in the principal roles, no more so tat Thomas Miller, who played the part of leading boy David, with a confidence that belies his age.

Thomas, who is already a consummate performer, attends a West End summer school every year. He is hoping to study drama at university and I have a feeling we will be seeing much more of him in the future.

Playing opposite him as Mary Foxtrot in the principal girl’s role with equal confidence was Grace Knowles, almost an old hand with five years experience with the society, but still yet to take her GCSEs.

Her delightful singing voice came to the fore in numbers such as ‘It’s In A Kiss’, ‘Once Upon a December’ and the ‘L.O.V.E.’ duet with Thomas.

Also worthy of special mention was Jacob Denning in the role of Herbert Hickory, the unfortunate son of the Baron and Baroness, his first time on the local stage at the age of 12, who grew into the role as the night progressed. A debut of which to be proud.

Top marks also for Izzy Carey and Josie Smith who took the roles of Slap & Tickle, the knock-about duo who got plenty of laughs and had the hall pulsating with their rendition of ‘Let’s Get Ready to Rumble’. They looked like they were having great fun.

The youngsters, of course,  were surrounded by a number of seasoned performers from whom the kids would have learned much.

Richard Shepherd, a favourite on the Bridport stage, made a perfect Dame Foxtrot in true pantomime tradition with outlandish costumes, frightening wigs and a stage presence that left no one disillusioned about how unfairly life had treated her!

Amanda Rattenbury-Davies was her usual hilarious self in the role of Willie Winkie with superb comic timing as always, and another stellar performance came from her father, Brian Rattenbury, as Baron Hickory, who had the advantage of having played the same role back in 2008, since when he has established himself as one of Lyme’s most popular and talented stage performers.

Brian makes it look all so easy but a suspect behind that lies a dedication to ensuring that he never lets his standards drop.

Good support came from the other principal players – Tracey Wood, who made a wholly believable neurotic Baroness Hickory; Jon Doody who extracted his fair share of boos and hisses for his portrayal of the baddie, The Wizard of Bong; Cody Wotton who made a very impish Black Imp; Naomi Davis-Griffiths as the very spritely Sprite; and John Tassell in the role of King Neptune.

The highlight of the show for me was the ‘Nobody Loves a Fairy When She’s 40’ sequence, starring Tanya Rattenbury (Queen Fairy Snowdrift) Louise Rawlins (Rose), Beverley Rattenbury (Iris) and Lorraine Knowles (Dewdrop). Truly hilarious – and they brought the house down.

A fabulous setting, especially the underwater scene, glorious costumes and some clever special effects (especially the video of the stolen clock being toured around the town) added to the overall enjoyment and professionalism of the production.

There’s very much a family atmosphere about Lyme Regis Pantomime Society. Indeed, it’s membership is made of groups of family and friends who clearly get a great deal of enjoyment and this sense of belonging does not escape the audience.

Producer/director Sarah Causley can feel well satisfied in bringing such a large and young cast together to produce a show which has done much to enhance the reputation of Lyme Regis Pantomime Society.

Pantomime photo special in this week’s printed issue of LymeOnline, out on Friday, March 6

JULY 3 2019 will go down as one of the most memorable nights in the Marine Theatre’s 125-year history. Marking the venue’s anniversary year, as well as his own 80th birthday, legendary actor Sir Ian McKellen took to the stage for his one-man show. […]

What does Artsreach mean to Dorset?

THE first Artsreach programme was launched in March 1990 to bring the performing arts to rural communities across Dorset, and it featured just nine venues. […]

Comic timing at its best in ‘Vicar of Dibley’

AUDIENCES at the Marine Theatre in Lyme Regis have been taken back to the 1990s this week, with an hilarious stage adaptation of TV favourite ‘The Vicar of Dibley’. […]