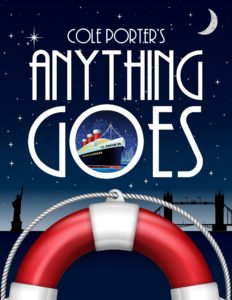 THE 1930s was a time of deep economic trouble in the United States. For the lucky few, however, it was also the heyday of glamorous ocean travel. So it is no surprise to find the action of ‘Anything Goes’ unfolding on the decks of the SS American, en route to London from New York.

Lyme Regis audiences can relive those heady days at the Woodmead Halls when Lyme Regis Musical Theatre stages ‘Anything Goes’ from Tuesday, May 14 to Saturday, May 18 as their 98th production.

It will be the second time the former operatic society has performed the musical comedy with music and lyrics by Cole Porter, one of the most admired song writers of all time, as they last performed it to rave reviews at the Marine Theatre in 2005.

The recognised bible for all things musical theatre – ‘Musicals – The Definitive Illustrated Story’ – records that the original book, by British humourist P.G. Woodhouse and British-American musical comedy writer Guy Bolton, involved the sinking of a ship.

Then, two months before ‘Anything Goes’ was due to open, the passenger vessel SS Morro Castle sank off the New Jersey coast with heavy loss of life. The script was hurriedly revised to keep SS American safely afloat and good taste intact.

The story concerns madcap antics aboard an ocean liner bound from New York to London. Billy Crocker is a stowaway in love with heiress Hope Harcourt, who is engaged to Lord Evelyn Oakleigh. Nightclub singer Reno Sweeney and Public Enemy #13, ‘Moonface’ Martin, aid Billy in his quest to win Hope.

The musical includes such classic Cole Porter’s songs as ‘Anything Goes’, ‘You’re the Top’, and ‘I Get a Kick Out of You’.

Since its 1934 debut at the Alvin Theatre (now known as the Neil Simon Theatre) on Broadway, the musical has been revived several times in the United States and Britain and has been filmed twice. The musical has long been a popular choice for school and community productions.

When Porter wrote the score to ‘Anything Goes’, he had one person in mind to play Reno Sweeney – Ethel Merman. He gifted her the show-stopping ‘You’re The Top’. The show was an immediate success and, inevitably, a film version followed in 1936 and there have been several revivals on Broadway and in the West End and a hatful of awards.

In 1954, Ethel Merman, at the age of 46 reprised her role as Reno in a specially adapted live television version of the musical, co-starring Frank Sinatra.

In the 2005 the Lyme Regis version performed by the operatic society produced a stellar performance from well-known local performer Tracey Wakeling in the role of Reno with Phil Akins playing opposite her as Billy Crocker, the fresh-faced all-American boy.

Among the list of principal cast members that year was Kelly Apps (nee Street), one of the most popular stage performers in West Dorset and East Devon, and who will be long remembered for her incredibly moving portrayal of Eva Peron in the 2015 production of ‘Evita’ by the Lyme Regis Musical Theatre.

In the 2005 version of ‘Anything Goes’, Kelly played the part of Ivy league debutante Hope Harcourt, but for this year’s production she is making her debut as director alongside the experienced Ian Crew (musical director) and Rachel Worsely (choreographer). They will make a formidable team.

Other leading lights in the 2005 production were Jill Chase, John Challis, Mike Brooks, Claire Denslow (nee Frankum) and Jim Pettifer. There are some familiar and popular faces on the cast list for the current production under rehearsal at the moment, including Silvey Webber (Reno Sweeney), Joe Binmore (Billy Crocker), Grace Herbert (Hope Harcourt) and Thomas Lowe (Sir Evelyn Oakleigh).

Parking is readily available at the Woodmead Halls and a licensed bar will be open before the show and during the interval.

For more details on Lyme Regis Musical Theatre, which will celebrate its 100th anniversary next year, visit www.lymeregismusicaltheatre.com

FROM a conventional upbringing to global notoriety via ‘The Naked Civil Servant’, Quentin Crisp was an extraordinary raconteur and wit, and one of the most memorable figures of the twentieth century. […]

Marine Players feeling festive as they prepare for ‘A Christmas Carol’

TIS the season to be jolly! Christmas may be a long way off but the Marine Players have been putting their festive feet forward and are rehearsing day and night to bring audiences ‘A Christmas Carol’. […]

THE popular Lyme Regis-based music charity B Sharp is looking for a new chairman of trustees. […]