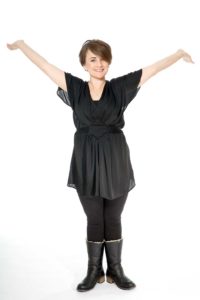 As well as performing on the ‘Live at the Apollo’ Christmas special, Laura Lexx has appeared on ‘At The Edinburgh Festival’ (BBC Two), ‘The Comedy Club’ (BBC Radio 4 Extra), and ‘The Jason Manford Show’ (Absolute Radio).

Following the critically acclaimed run of her show ‘Trying’ last year, she has gone on to win Best Performer at the Comedian’s Choice Awards (2018). She was also included in the top 10 list for Dave’s Funniest Joke of the Fringe (2018).

The supporting line-up begins with the westcountry favourite, Jon Wagstaffe. Beating the competition to be dubbed Tewkesbury’s finest stand-up comic, Wagstaffe’s take on modern life will have any audience in fits of laughter.

Also supporting the Christmas edition of the Marine’s Comedy Club is Morgan Rees. This softly spoken Welsh comedian comes jam-packed with an arsenal of quippy one-liners and hilarious short stories.

Rees has appeared on BBC Radio 4 in the finals of the BBC New Comedy Award and was also a runner-up in So You Think You’re Funny (2017).

Resident compere Tom Glover will top off the bill.

Lyme Regis Comedy Club will be held at the Marine Theatre on Saturday, December 14, with the bar opening at 7pm for an 8pm start.

LYME Regis’ regular comedy club welcomes a ‘man of many voices’ Danny Posthill, who reached the final of ‘Britain’s Got Talent’ in 2015. […]

Laugh away the January blues at Lyme Regis Comedy Club

FOUR comedians are on the bill at Lyme Regis Comedy Club this month. […]