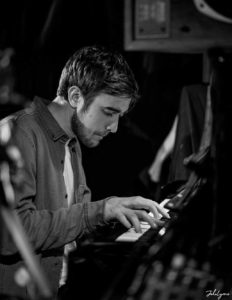 PIANIST, composer and arranger, Matt Carter returns to Lyme Regis this month with a new band of exciting young musicians for their debut gig in the county.

This special event will see the ensemble, the Matt Carter Septet, kick off its first ever national tour here in the West Country, playing material influenced by swing, gospel and funk and some of Matt’s original compositions.

Matt Carter is no stranger to the region. He originally comes from Exeter but is currently based in London, studying jazz at the Royal Academy of Music, where he met and formed his new band.

And after a hugely successful Stevie Wonder tribute with Leigh Coleman at May’s Jazz Jurassica festival, Matt has already impressed local audiences with his dynamic piano playing and ability to attract gifted collaborators.

Julie Sheppard of Jazz Jurassica, which is organising this special concert, said: “Grab a front row seat to see tomorrow’s jazz stars in the making. We think you’ll be amazed by the talent of these young players, some of whom are already award-nominees in their own right. They may be just starting out but they’re capable of delivering some of the finest jazz you’ll hear all year.

“This is our first ‘pop-up’ event and the first time we’ve used the Pine Hall at the Baptist Church. We’re inviting customers to bring along their own drink and we’ll supply glasses, ice and nibbles – we’re hoping it proves a popular format! Capacity is limited so booking in advance is a must.”

The Matt Carter Septet will perform on Saturday, August 10 at Lyme Regis Baptist Church, doors opening at 7.30pm for an 8pm start.

BRINING you all your favourite hits from Frankie Vallie and the Four Seasons, tribute act The Jerseys will perform their spectacular show ‘Oh What a Nite’ at the Marine Theatre in lyme Regis this December. […]

Review by By Gill Hanscombe A PACKED audience enjoyed the first performance of ‘Go, Goliath!’, written as a special commission by composer Nicholas Brown and with text by Simon Ford, at St Michael’s Parish Church […]