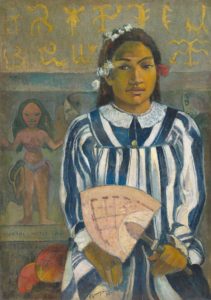 A LANDMARK cinematic event will be streamed to the Marine Theatre in Lyme Regis, combining the new biopic of artist Gaugin with an intimate screening of the National Gallery’s forthcoming exhibition of his portraits.

One of the world’s most popular and important artists, yet historically problematic, the documentary will be followed by an exclusive and private 30-minute viewing of the National Gallery’s debut exhibition on Gauguin’s portraits – only a few days after its opening in London.

Narrated by Dominic West, known for his lead roles in ‘The Wire’ and ‘The Affair’, the film will explore Gauguin’s artistic achievements.

Filmed on location in Tahiti, France, the Marquesas Islands, and the UK, the documentary includes commentary from Gauguin’s living descendants, contemporary artists, and leading world experts.

This event will examine Gauguin’s continued artistic legacy, alongside gender and post-colonial politics, as the film reassess the artist’s position, his treatment of young indigenous women, and his role in the history of 19th century French colonialism.

The exhibition spans Gauguin’s early years as an artist through to his time in French Polynesia, which illustrates how the artist revolutionised the portrait.

Gauguin’s innovative approach to his portraits, such as the addition of carefully curated attributes or destabilising the sitter by landing them in a suggestive context, meant that he could tease out true personalities and hidden meanings.

An exclusive event for cinemas, filmed in high-definition with stunning close-ups that would be hard to achieve amidst a sea of people, the exhibition’s private view provides art enthusiasts with a never-before-seen opportunity to see this debut exhibition of Gauguin’s portraits on the big screen.

It will be screened at the Marine Theatre on Tuesday, October 29 with the bar opening at 2pm for a 3pm start.

‘Kinetics’ – from stage to screen

BRAVE, honest and humorous, ‘Kinetics’ was originally written as a stage play but, following national demand for it to tour and a subsequent fundraising campaign, it was turned in to a film which is now set for a one-off screening hosted by Artsreach this February. […]

A FORMER Woodroffe School student has had her work selected for an exhibition celebrating emerging artists in Exeter. […]

DORSET’S touring arts charity Artsreach is backing a national campaign celebrating village halls, and turning the spotlight on the work of its own team of volunteer promoters who devote their time to hosting professional arts events in these venues. […]