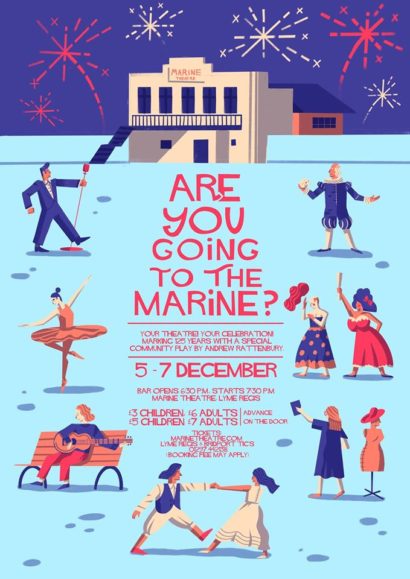 AS the Marine Theatre in Lyme Regis comes to the end of its 125th anniversary year, a special community play will be staged to mark the milestone.

The play ‘Are You Going to the Marine?’ has been written by Lyme-born scriptwriter Andrew Rattenbury, who has previously written episodes for the BBC’s ‘EastEnders’, ITV’s ‘Doc Martin’, and Channel 4’s ‘Teachers’.

With a local cast, writer, director and musical director, the show is a celebration of Lyme Regis, the theatre, and the community.

The production includes sections from many local societies – Lyme School of Ballet, Lyme Regis Pantomime Society, the Marine Players, B Sharp, Lyme Regis Musical Theatre and Saxminster. For example, the musical theatre society will be reviving a section of their 1938 performance of ‘The Mikado’ at the Marine.

The result is that everyone involved in the play is passionate about ensuring that “the audience see themselves reflected in the piece and the theatre’s history,” says musical director Declan Duffy.

The play opens as a technical rehearsal and is set up as a play-within-a-play. It charts the whole chronological history of the little theatre by the sea, from its time as a Georgian bath, through both wars, swinging into the 60s, and finishes by looking toward the Marine’s future.

The Marine’s long and rich history is seen through the eyes of three pairs of lovers who we meet them in different periods of time who act as a thread that weave together the 125 year history.

The writer, Andrew Rattenbury, posted a call-out on social media for people’s stories of the Marine and said that “the majority of the responses were tales of love and romance”.

This, he says, is what he wanted to be reflected in the play. Tales of unrequited love, 50-year long marriages, and fleeting romances have all been sparked from chance meetings under the twinkling lights of the Marine.

The play is personal for Lyme Regis, as he hopes that the audience are free to see themselves reflected in the story.

His passion for the community is evident, saying that “writing for the anniversary is like soul food”.

Georgia Robson, the director, is no stranger to the Marine stage herself, having performed there as a child and in the recent production of ‘Monmouth’.

She said: “As a director and a member of the community, I am excited to see the play come together and loving working on the project.

“The cast members as well as the Marine stage are familiar and friendly, something I hope the audience will feel as well.”

Musical director Declan has mirrored the 125-year story with music from across the period: the first is from the 17th century, finishing with Daft Punk. The string quartet, unaccompanied singing, and the rock and roll band represent the cacophony of sounds that have emanated from the theatre over the years.

‘Are You Going to the Marine?’ will be staged at the Marine Theatre from Thursday, December 5 to Saturday, December 7 with the bar opening at 6.30pm nightly for 7.30pm starts.

THEATRE company Scandal and Gallows will premiere a play about the life of Lyme Regis fossil hunter Mary Anning at the Edinburgh Festival Fringe this summer. […]

LymeOnline editor Francesca Evans presents this special news bulletin, bringing you the latest of how the coronavirus epidemic is affecting the Lyme Regis area, plus all your other local news.  […]

THE Marine Theatre in Lyme Regis has announced that top chef and restaurateur Mark Hix has joined the arts venue as a patron.
[…]