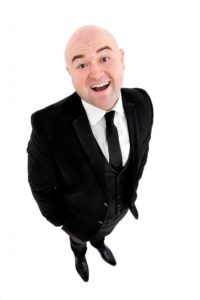 LYME Regis’ regular comedy club welcomes a ‘man of many voices’ Danny Posthill, who reached the final of ‘Britain’s Got Talent’ in 2015.

He performs alongside former English Comedian of the Year Jack Campbell at the Marine Theatre on Friday, October 26.

Danny Posthill is an impressionist and stand-up comedian who has performed all over the world. His subjects include Jimmy Carr, Billy Connolly and Lee Evans.

As well as ‘Britain’s Got Talent’, Danny has performed on many television programmes including ‘Pointless Celebrities’ along with Alastair McGowan, Rory Bremner and Jon Culshaw.

On Sky News, Danny impersonated Donald Trump in a rap battle against Hillary Clinton; ‘The Donald’ now plays a big part in Danny’s act (it has even led to Donald Trump themed shows events across the world).

Winner of English Comedian of the Year 2014, Jack Campbell has performed in Australia, Germany, Finland, Latvia and Estonia. He also was shortlisted for the BBC Radio New Comedy Award finals.

This is a regular event at the Marine Theatre, which has four comedians on the bill. Resident compere Tom Glover hosts, and Matt Price is also on the bill.

Winner of Soho Stand-up Award to perform at Marine

THE stage at the Marine Theatre is set for a special headliner at the monthly Lyme Regis Comedy Club. […]

Final preparations being made for Lyme Regis pantomime