WHEN I first started out as a reporter, at the tender age of 17, local newspapers covered virtually every event that took place. And in those days that meant attending every annual dinner and dance which necessitated me having to buy my first dinner jacket whilst still a teenager, which all my mates thought was a bit odd.

I also took ballroom dancing lessons so I didn’t look totally out of place as the evenings wore on – and that was looked upon as even odder by my pals. One of them always referred to me with much glee as “twinkle toes”. He still does sometimes. It’s surprising we’re still friends 50 years later.

In Lyme Regis such events were invariably held at the Royal Lion which was really the social centre of the town. These were the days when the Lion was run by Bob Dunne, a much respected licensee who also ran the Volunteer Arms just up the road.

Rarely a Saturday night passed during the winter when there wasn’t some sort of function at the Lion, with the dinner being served upstairs in the hotel restaurant and ballroom. All the men wore Penguin suits and the ladies were in ballgowns.

Quaintly, the ticket always informed you that there would be “carriages at 1am”. Never did see those carriages.

The Lion was also the most popular venue for weddings and if I remember correctly there was a Hampshire motor club that came to Lyme every year for a weekend to hold their annual bash at Lyme’s premier hotel.

Virtually, every organisation in town held a dinner-dance, including the Rotary Club, Round Table, Freemasons, Sailing Club, Chamber of Trade and Skittles League, the latter being a male-only event, so no dancing afterwards but the scene of quite a few punch-ups. There was one classic occasion when two brothers went to fight and knocked over the grandfather clock in the bar.

I can remember the late Mike Leeming being the chief chef at the Lion, to be followed many years later by his son, Jon, now cheffing at The Volunteer, and our favourite barman was Jim Hayball. Jim only took the barman’s job to help out but ended up staying 40 years. His son, Brian, also became a publican/hotelier, at one time running the Mariners Hotel and the Rock Point Inn with his wife Julie before retiring to Lanzarote.

The Lion continued as a Bass Charrington house after Bob Dunn’s retirement. The next door New Inn was acquired and run as the Long Bar, managed by the late Bert Cable, and later turned into rooms.

There was a number of managers who came and went before the Lion was sold in the 1970s to Uplyme butcher Bob Irish and his wife Margaret and their friend Jack Cross. I remember going to the auction in Crewkerne as there was much conjecture over who was going to buy it and was gobsmacked with how much it went for. I can’t remember the exact sum but it was certainly in six figures, a princely sum in those days.

Bob, Margaret and Jack were popular mine hosts and rebuilt what was a dwindling hotel and bar trade and also built an indoor bowls facility at the back.

In the 1980s the hotel was acquired by Brian and Judy Sineisi who invested heavily in the building, turning the bowls area into a swimming pool and adding bedrooms at the back with views over the old town.

The current owner, Miss Lesley Stone, acquired the Royal Lion in 2002, having gained extensive experience in the hotel trade running establishments in Bournemouth, Southampton and the New Forest. Since then she has invested significantly in improving facilities at the hotel, refurbishing the 33 bedrooms on a number of occasions in the last 17 years.

Miss Stone has also been a huge supporter of local events and organisations in the town and is keen to maintain the Lion’s reputation as the principal locations for the town’s big social occasions.

After many years of improvements, the Royal Lion is probably more successful than it has ever been. The bar has a fine reputation for its food and the ground floor Monmouth Room is well used by residents and locals who want a more quiet and leisurely atmosphere.

The upstairs restaurant, now the Oak Room, is still the dining room for guests but is available for non-residents, weddings and family celebrations and dinner-dances with a menu fitting a hotel of this standard. Oak beams, wood panelling and an open fire help to create a warm, welcoming and comfortable atmosphere.

Next year Lyme Regis Musical Theatre (formerly the operatic society) has chosen the Oak Room as the venue for their 100th anniversary dinner with some members attending having their wedding reception at the Lion many years ago. It promises to be a sparkling occasion. 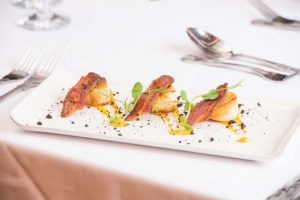 ‘Nothing was too much trouble’

To sample the delights of the Lion’s blend of classic and modern cuisine, masterminded by head chef David Burns, Miss Stone invited my wife and I and two friends, Danny and Jo Hopkins, to dine in the Oak Room. We had spent the early evening listening to a 32-piece Norwegian big band at the Marine Theatre, part of the Jazz Jurassica weekend, so it turned out to be a delightful bank holiday treat.

The Oak Room operates just as you would expect in an hotel with the Lion’s reputation – crisp white tablecloths, silver service and smartly dressed waiting staff for whom nothing was too much trouble. The presence of resident pianist Chris Magarth playing throughout the evening added a touch of old-world class to the evening.

I’m a sucker for soup and chose to start with a piping hot bowl of cream of leak and potato with croutons. Jackie and Jo chose the wine poached pear with crumbled blue cheese, candied walnuts and honey mustard dressing whilst Danny selected Lyme Bay scallops with beetroot and horseradish puree, pickled cucumber and strawberry vinaigrette. We were all pleased with our first course choice.

For mains, I plumped for the corn fed breast of chicken with an unusual accompaniment – sage and onion bread and butter pudding with aubergine fritters in a white wine a chive velouté. It was the first time I’ve had bread and butter pudding as a first course, but it was delicious if not a bit filling, but very unusual. I’m not great fan of aubergine but served as a fritter it was an unexpected but delightful touch.

Jackie and Jo both ordered the grilled fillet of salmon with samphire, roasted new potatoes and saffron in a tomato concasse cream which looked very appetising. Danny chose the oven baked rump of lamb, sautéed spring greens in a rosemary and recurrent jus. Again no complaints all round.

The vegetarian option on the menu was an asparagus and minted pea risotto and for the less adventurous pan fried ribeye steak was available with cherry tomatoes, field mushroom and hand-cut chips in a peppercorn sauce. 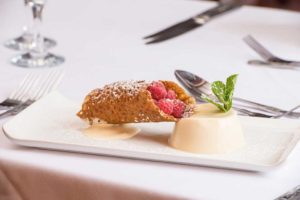 ‘None of us were disappointed’

There were five options on the sweet menu but all four of us could not resist the mandarin and stem ginger tart with passionfruit sorbet. None of us were disappointed.

For the record, the other sweets were sticky toffee pudding with toffee sauce and vanilla ice-cream, lemon posset with berry compote and homemade shortbread, fresh fruit salad and a section of Dorset cheeses with quince jelly, celery and grapes, followed by tea or coffee with homemade petit fours.

The Lion has a well-stocked and varied cellar and Danny picked out a very acceptable South African red Stollenbosh which accompanied our meal very well.

Price-wise, our choices were well within the expectation of an up-market hotel, particularly taking into consideration the standard of service. The starters were priced between £6 and £9, main courses £17 to £20 pounds and desserts £6 and £8.

Non-residents can also enjoy a full English breakfast in The Oak Room and there is an extensive bar menu downstairs with daily specials. If you are looking to dine out to celebrate a special occasion, or would just like to nudge the clock back a bit, the Oak Room at the Royal Lion will do you proud. You may even want to dress up.

To book at the Royal Lion Hotel call 01297 445622 or for more details visit royallionhotel.com

About Philip Evans 715 Articles
Veteran journalist and newspaper manager Philip Evans has worked in the publishing industry for more than half a century. He started out as a reporter for Pulman’s Weekly News as a young man and went on to work for an international publishing company in the UK, South Africa and Australia before returning to Lyme Regis where he is still reporting on local events as he has done for more than 53 years.
Twitter

Seasiders end season with promotion hopes and a trophy

YOUNGSTERS from the Lyme Regis area are being offered the unique opportunity to train aboard the tall ship Pelican this Easter. […]