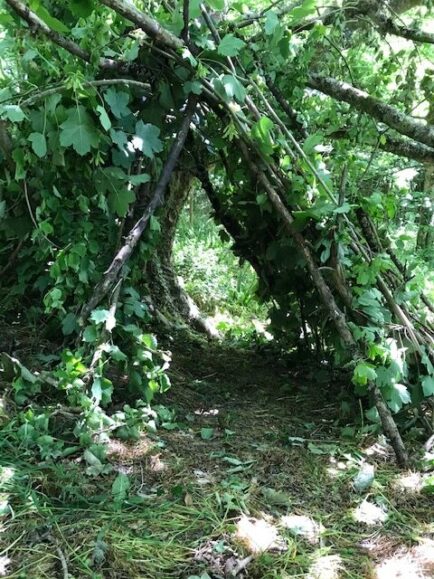 ALL four sections of the 1st Charmouth Scout Group have been challenged to collectively clock up 100 nights camping ‘under the moon in June’.

That means that the Beavers, Cubs, Scouts, Explorers, and their parents, will spending a night or two out in a tent, shelter, hammock or bivouac this month. Since not all parents have tents, hammocks or tarps, the group will be making these available to any parent who wants to borrow them.

If the members cannot sleep out in their gardens, then they are being encouraged to build a den or shelter in their bedroom, out of sheets and blankets, and hang an image of the moon from the ceiling or lampshade.

Group Scout leader Kevin Payne said: “Unfortunately, due to lockdown, a planned Cub weekend at PGL in Osmington was cancelled and an Easter camp for Scouts and Explorers on Brownsea Island has had to be rescheduled for 2021.

“The Scouts and Explorers were also due to attend a mini Jamboree at the end of July in Windsor Great Park, but this, too, has had to be put back a year. We had also hoped to have a group camp locally but cannot now see this being able to be run. So, at present, this is the best we can do.

“However, we will be encouraging everyone to tackle a number of fun challenges during the camp, such as packing their own rucksacks, cooking their own meals, making balloon rockets and having a go at some night navigation – all under parental supervision, of course!.”

Already, some of the Cubs, Scouts and Explorers have been practising their shelter building and wood fire cooking in preparation for their moon camp, as pictured.

IT was smiles all round this week for the 1st Lym Valley Scouts, as they prepared to return for a socially-distanced term. […]

MEMBERS of the 1st LymeOnline Valley Scout Group recently visited The Tunnel Target Sports Centre, near Charmouth, as part of their Master at Arms Badge. […]

Scouts prepare for expeditions to Africa

EXPLORER Scouts from the 1st Charmouth Scout Group organised a sponsored trek cart pull to raise funds for their upcoming expeditions to Africa. […]