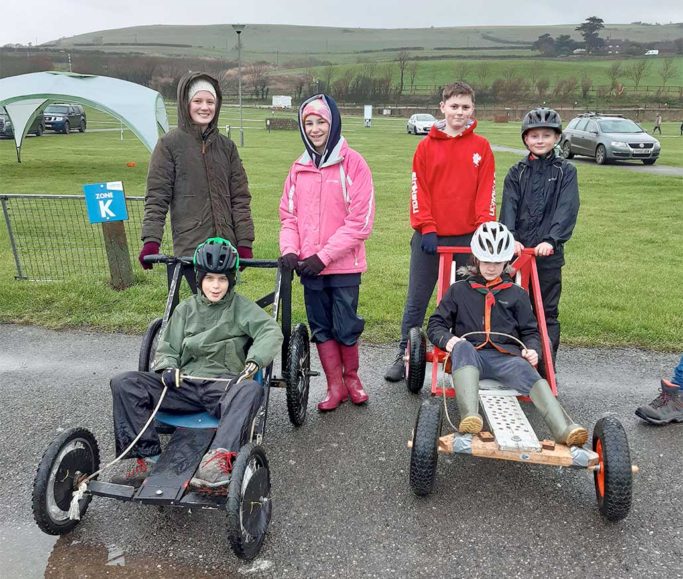 Held at at a very muddy Freshwater Holiday Park, the teams had to the chance to compete in four separate races: road; sprint; down hill, and off road.

‘Stealth’, the Charmouth Scouts’ box kart, did well in the road and sprint races and came first in the off road, despite having to be pushed about 400 yards through a quagmire that included a 60-yard, 12 inch deep puddle. 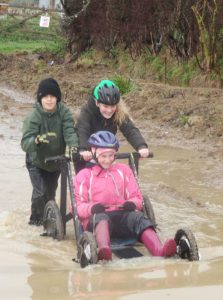 ‘Borderline’, the Lym Valley Scouts’ entry, was doing really well in the down hill until it turned over and snapped an axle. Fortunately, the troop were able to use a spare kart for their off road race.

After the presentations, 1st Lym Valley Scout leader Karen Yelland said: “Our Scouts had a great time, despite getting very wet and extremely muddy. They all came back with huge smiles on their faces.

“My thanks to Charmouth Scouts for inviting us along – we can’t wait for next year!”

Kevin Payne, Scout leader at Charmouth, added: “We were delighted to invite the Lym Valey Scouts to join in, as they had asked us to enter their cardboard boat race in July.”

About Francesca Evans 2227 Articles
Francesca grew up in Lyme Regis and has worked in community journalism in the area since 2011, having gained a First Class Honours degree in journalism and her NCTJ qualifications at Southampton Solent University.
Instagram Twitter

Scouts from across district compete in raft race

A BRIGHT and sunny Sunday morning saw Scouts from across East Devon, along with invited guests from Charmouth, gather at Victoria Pool, off the Cobb in Lyme Regis, for the District Raft Race. […]

THE 1st Lym Valley Scouts avoided a soaking last week, as their homemade cardboard boats impressively stayed afloat when put to the test in the harbour. […]

THANKS to promotion in the local press and school newsletters, the future of the 1st Charmouth Scout Group’s Beaver colony has been secured. […]