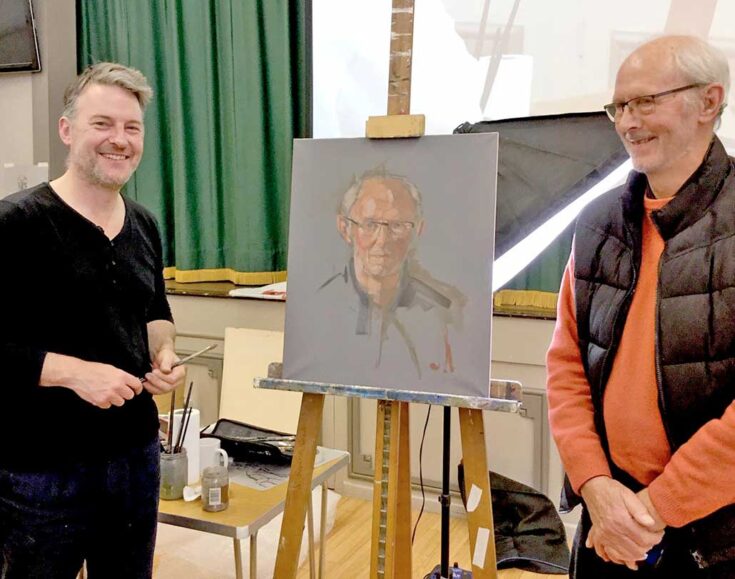 LYME Regis Art Society’s final demonstrator of the spring season told members not to expect success when creating a portrait, but that afternoon proved himself to be mistaken.

In just half an hour, James Budden created a stunning image that captured not only the likeness but the very essence of his sitter.

Earlier he had taken members through figure drawing, mapping out the main points of the skeleton in triangles before building the figure around them.

During the tea break, he used the same technique with his portrait, first creating an accurately measure framework of facial bones explaining every move and thought process as he did so. He then carefully created his palette of oil colours, with a light, medium and dark shade for each colour.

He told members: “There is no flesh colour – you paint what you see in each situation.”

That left him 15 minutes for painting and members watched as, stroke by stroke, with a chisel-ended brush, he picked out the areas of shadow and light with every brushstroke perfectly placed for the best effect.

A spokesperson for the society said: “It was a truly mastery and inspiring performance from a very talented yet very modest artist.|

Lyme Regis Art Society meets on alternate Tuesdays in the Woodmead Halls from 2pm to 4pm, from September until the end of March. Visitors and new members would be welcome when the new season starts in September.

The society will be hosting its annual exhibition at the Town Mill Malthouse Gallery from May 25 to June 5 with free admission.

For further details, contact Sheila Stratton on 01297 445464 or visit www.lymeregisartssociety.org.uk

DJ turned artist, Richard Kaye, will be showing his work at the Malthouse Gallery at the Town Mill in Lyme Regis next month. […]

THE image caused quite a splash when it mysteriously appeared overnight in February 2012. But now the painting of a stork holding a fish in its mouth, by elusive artist Banksy, is fading fast on the banks of the River Lim. […]

Views from the ‘Waterline’

TWO photographers from the Devon-Dorset border, Tricia Scott and Lois Wakeman, discovered that they share an uncannily similar view of the world after first meeting in 2010.   […]