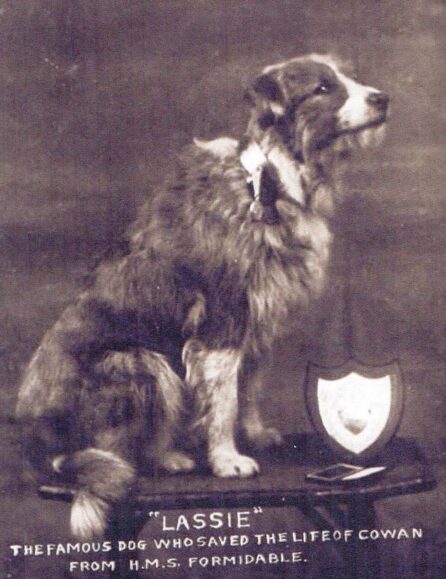 JUST five months after war was declared its impact was felt in Lyme Regis when the battleship HMS Formidable was sunk in Lyme Bay.

Two torpedoes struck the ship in the first hour of the New Year 1915. The ship had been off Portland awaiting daylight in order to negotiate the anti-submarine boom and anchor in the harbour.

In one of the ship’s boats there were 74 men when it pulled away from the sinking ship. It was bitterly cold and, in the darkness and without a compass, the seaman had no positive idea of their position.

Waves were breaking over the boat; to avoid being swamped those with boots used them as bailers, one of the boots is on display in the museum.

Daylight did little to ease their dire situation and by nightfall several had died of exposure. To lighten the boat and improve the chances of survival it was necessary to cast the dead overboard. In all 17 bodies were consigned to the sea.

War time blackout restrictions meant there were no shore lights. Fortunately a negligent act allowed a bright light to shine out and indicate the shoreline.

After 23 hours of rowing and bailing in an open boat, breaking waves swept it onto the beach at Cobb Gate. The boat contained six dead and 51 living, three of whom later died.

Able Seaman John Cowan was believed dead and laid out on the floor of the Pilot Boat Inn. The landlord’s crossbred collie dog Lassie knew better, licking Cowan until he regained consciousness. For this life saving act Lassie was awarded a medal and a silver plaque.

Reputedly the dog’s action inspired the Hollywood films featuring a sheepdog with the same name, and a collection of Lassie themed pictures are displayed in a corner of the recently refurbished Pilot Boat.

Six of the dead were buried in the town’s graveyard following a civic service attended by a large number of residents. A Celtic cross marks the mass grave, the youngest being a boy seaman aged 17 years.

Of the 755 officers and men on the battleship, 551 perished. It was the first naval disaster of the war.

There are conflicting reports as to who did what in rescuing the seamen on that dark and stormy night when the ship’s boat beached. James Stockley, a police sergeant, received three bravery awards on unsubstantiated claims. The Chief Constable decided not to endorse a fourth award of the Police Silver Medal, possibly taking the view that enough was enough.

Eyewitness accounts claimed that there were three other men equally deserving recognition. Mrs Annie Harding, who with her husband and daughter had been the first to spot the boat stated that “Stockley had instigated what she termed the Stockley legend”.

Anyone who pays their respects at the grave will be reminded of the sacrifice that thousands of brave seamen of the Royal Navy made in defending our shores during the First World War.

AS part of the celebrations for Lyme Regis Museum’s centenary year, the Friends of the Museum set up a bursary for sixth for students from The Woodroffe School. […]

The Duke of Monmouth – Part II

THE Monmouth-led rebellion was a result of anti-Catholic feeling in the western counties, with Monmouth’s aim to depose the Catholic-minded James II. The Duke promised that, when King, he would defend the country against popery, tyranny and oppression. […]