WE recently met with the newly-appointed West Dorset Neighbourhood Inspector and spoke to him about local policing in Lyme Regis.

Inspector Stanton was appointed as the neighbourhood inspector for West Dorset and was keen to start meeting key partners in the community.

They met to share any concerns regarding Lyme Regis and how the relationship between the local police and the council might work in the future.

Among the issues discussed were local concerns about the level of policing in the town and the importance of having regular liaison meetings with officers to prepare for local events.

They also spoke about the benefits of improved CCTV, a project which the council is currently implementing; this includes improving existing cameras, including those on the Guildhall and Marine Parade Shelters, and installing new ones in key areas such as the gazebo in the gardens and Anning Road playing field.

Also discussed were the benefits of Automatic Number Plate Recognition (ANPR) cameras and the Community Safety Accreditation Scheme, which aims to contribute towards community safety by combating crime, disorder, public nuisance and other forms of anti-social behaviour in cooperation with the police. However, these are schemes the council has decided not to pursue at the moment.

It was agreed the mayor and town clerk would continue to meet with Inspector Stanton to keep up-to-date with local policing issues.

Inspector Stanton said: “Since being appointed as police inspector for West Dorset I have been busy meeting with partners including the various town councils within my policing area.

“The meeting with Lyme Regis Town Council clerk, John Wright and Cllr Michaela Ellis was very useful to discuss matters which affect both the police and the council and to provide updates in relation to the policing of Lyme Regis and I look forward to working with them and other key partners to ensure that West Dorset remains a safe and pleasant place to live, work and visit.”

Strategic issues such as police funding and officer numbers were not discussed at the meeting; these kinds of questions will be directed to the Dorset police and crime commissioner Martyn Underhill when he speaks to the council next month.

Mr Underhill and Inspector Stanton will be attending the Full Council meeting on Wednesday, February 13 at 7pm in the Guildhall and we would encourage the public to attend, make representations in the public forum, and listen to what they have to say.

Review of controls over dogs on main beaches

THE issue of dogs has come under the spotlight recently and the town council is pressing for a review of local controls.

One of our councillors brought to the council’s attention a recent incident where a child was bitten by a dog which was off the lead on the sandy beach.

Since then, we have received a number of letters about dogs, which we have passed onto West Dorset District Council (WDDC), the authority responsible for local dog controls.

WDDC introduced a Public Space Protection Order (PSPO) in October 2017, which includes regulations relating to dogs on the beach and other areas where there are restrictions, such as Anning Road playing field and Langmoor and Lister Gardens.

The order also includes rules on dogs on leads and the removal and disposal of dog faeces.

The town council’s enforcement officers are authorised by WDDC to issue a fixed penalty notice to anyone who does not abide by the order.

Most of the letters we have received have been regarding dogs on the sandy beach; the PSPO allows dogs on the beach, on or off a lead, between October 1 and April 30.

Before the PSPO was introduced in 2017, WDDC carried out a public consultation, which the town council responded to.

Previous restrictions meant dogs were excluded from the beach between April 1 and October 31, while the existing PSPO reduced the exclusion period by two months.

The town council was completely opposed to this, with some members even calling for a complete dog ban on the sandy beach, as well as the cemetery.

With the issue now coming under the spotlight again, we are asking WDDC to review the dog controls and expressing our concern over how the situation has deteriorated since the introduction of the PSPO.

WDDC agreed the matter would be discussed by its Overview and Scrutiny Committee on January 22, when evidence of the recent dog attack and a letter from the town clerk will be considered.

The PSPO expires in October 2020 but the process of review and consultation will start this year, when the council – and the public – will have the opportunity to make comments.

Get your applications in for council grants

APPLICATION forms for community grants of up to £4,999 are now available.

The council has around £40,000 available for local groups and organisations for community-based projects. Organisations will be able to apply for minor grants of up to £999 or medium grants of between £1,000 and £4,999.

The deadline for applications will be Wednesday, February 30 and the councillors will consider the bids at a special council meeting on Wednesday, March 27.

Examples of projects which have benefited this year include training tracksuits for the Lyme Regis Majorettes, new sailing dinghies for Lyme Regis Sea School, electronic protection equipment for Lyme Regis Taekwondo Club, and the running of the Axe Valley and West Dorset Ring and Ride Service.

All the organisations we have funded over the years have been able to demonstrate they provide services and opportunities for the community of Lyme Regis.

We welcome applications from organisations who may not have applied before, and new groups who may be getting started.

Application forms are now available from the council office or email Adrianne Mullins at admin@lymeregistowncouncil.gov.uk

For advice on whether an organisation or project would qualify, or help with filling in the application form, contact Adrianne on the above email or call 01297 445175.

AN update on the proposed Dorset National Park will be given to the council later this month.

The council was first approached about the opportunity to create a new national park in July 2016 when the team leading the project gave a presentation to members.

There were further developments in December when a government-appointed review considered the case for new national parks and Areas of Outstanding Natural Beauty, including the proposed Dorset park.

We previously advertised that the project team would be giving a further update to members at a meeting on January 23. However, please note this date has now changed. The update will be given to the Strategy and Finance Committee at its meeting on Wednesday, January 30 at 7pm in the Guildhall.

The public is welcome to attend to find out more about this project.

WE’RE creating a new woodland walk through the seafront gardens to help the public get closer to nature.

The external works’ team is currently building a new path through the wood, running above the existing woodland walk in the Langmoor and Lister Gardens.

We recently put bird feeders and nest boxes along the walk to encourage wildlife to the woodland and we will now be adding bug hotels, bird tables, bat boxes and information boards highlighting the flora and fauna in the area.

THIS month we said farewell to our long-standing head groundsman after 30 years of service.

Barry Trott has left the council to take up a new challenge and we wish him well.

Barry joined the council in April 1988 as a gardener and was later promoted to head groundsman. He takes with him a wealth of knowledge and experience and we now have the task of finding a suitable replacement.

Recruitment has already started and we look forward to welcoming a new person into the role. Click here to view job advertisement. 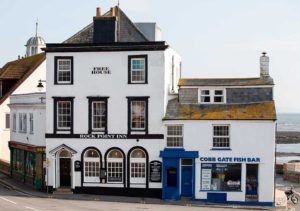 COUNCILLORS have been invited to have a sneak preview of the plans for the all-new Rock Point Inn.

St Austell Brewery, which bought the iconic pub in November, will informally present its plans for the Rock Point Inn to members next week.

The brewing and pub company said engaging with the local council is an important process, as it feels it has ‘a responsibility to the community and a desire to protect such a historical location’.

Emergency services continue to work together to tackle COVID-19

A RAFT of emergency services and public agencies are continuing to work together to keep the public safe and informed during the COVID-19 pandemic.   […]

LYME Regis councillors have expressed concerns about dangerous skateboarding in the town, which they fear could result in serious injury or even death. […]