WHEN the new town council takes over running Lyme Regis in May, one of the first issues on the agenda is bound to be the fee which the makers of Mary Anning film ‘Ammonite’ have paid for disturbance money.

When the matter was last discussed in the council chamber, town clerk John Wright, who negotiated the fee, made it quite clear he would not be revealing the amount because the film company asked for it to be confidential, but it would be disclosed to councillors at an appropriate time and if councillors wanted to make the amount public, that was up to them.

However, an informed source has told me that the figure is a lot less than that, nearer to the £15,000 mark.

When the council first discussed the fee in open debate, Ken Gollop, speaking from the public gallery, expressed the view that whatever the fee was it should not go into council funds but should be given to an organisation like the Rotary Club, as they were used to distributing funds to good causes. He suggested something like offering a youngster a bursary.

My information, however, is that the film company is anxious for the fee to go towards the cost of the proposed project to erect a statue of Mary Anning and there seems to be growing support for this.

There’s been some discussion on social media this week about how much the statue will cost with £200,000 being mentioned.

At a council meeting it was stated that the statue could cost as much as £350,000, but my information is that it will be nearer £175,000 with the statue being one and a half times life-size erected on a small plinth.

There is bound to be some discussion on where to site the statue, the favourite option being on the new East Cliff promenade, what we used to know as Gun Cliff, near to the anchor, fairly central and not far from where Mary Anning discovered the famous ichthyosaur which now sits in the Natural History Museum in London.

The cost of the bronze statue will be met by public subscription with a crowdfunding initiative being launched soon. Mary Anning is now recognised as an international figure and the project could attract worldwide support and possible financial assistance from the world of earth sciences.

To date, there is no talk of Lyme Regis Council making a contribution, but if the project is a goer they will surely be asked to do so in the future.

There is no doubt that the Mary Anning phenomenon has brought many thousands of people to Lyme Regis and will continue to do so as the fascination for fossiling grows at an unbelievable rate. 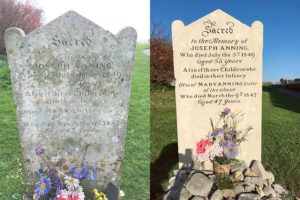 You can’t please everyone!

THE old adage that ‘you can’t please all the people all of the time’ is certainly true when it comes to local government.

Although it was not their specific responsibility, Lyme Regis Town Council took a lot of stick for allowing the 172-year-old Mary Anning gravestone in the parish churchyard to deteriorate so badly.

They responded in the end by commissioning a stonemason to clean up the gravestone which has been met with general approval – apart from a few on the LymeOnline website who thought the council had “ruined the patina and natural ageing of an old gravestone”.

Another commented that it was “a very poor decision” and “had done nothing to give the site a special place in history”.

Birds of prey on the front

LYME Regis made the Jeremy Vine Show on BBC Radio 2 again last week – but this time it wasn’t about filthy toilets and the lack of cash machines.

What caught the broadcaster’s attention this time was the sight of a bald dagle and other similar breeds mingling among the visitors to Lyme when the town council arranged a falconry trial in a bid to solve the increasing problem of seagulls causing mayhem when the swoop in to snatch food from those enjoying an ice-cream or a sandwich on the seafront.

The councillors who witnessed the trial were pretty astounded how the seagulls suddenly disappeared when the birds of prey were set loose – but they soon returned when the eagle was put back in its cage.

Local photographer Richard Austin, who has won awards for his wildlife photography, has seen many such displays and does not think the use of such tactics will solve the problem.

Whether it’s an economic solution to the problem remains to be seen, but at least the town council is trying all options to find a way of dealing with the seriously serious problem.

AFTER a hectic day at work last Thursday, my daughter Francesca and I decided to blow the cobwebs away and take a long walk on a glorious early summer’s evening.

We strolled out to Middle Mill and through the woods to Uplyme, across the King George V playing field and up over the hill that overlooks the village where I stood for a few moments to take it all in.

I don’t think I have seen Uplyme look more beautful in the early evening light. Below me was the Uplyme Football Club pitch in immaculate condition, the best I have seen and a far cry from the days when I played on it.

The cricket field had been freshly cut, the croquet players were practising and the refurbished tennis courts were in use. In the near distance, the cricket pavilion, village hall, parish church and pub all added to Uplyme being the archetypal English village.

What I didn’t know was that Francesca took a photo of me surveying all and put it up on Facebook, attracting a number of mildly sarcastic comments on what I was doing in the village where my reputation is pretty well down the approval scale. Long story!

Then we walked on as far as the old railway viaduct at Cannington, where I hadn’t been for at least 40 years, and back to Uplyme where we stopped for refreshment at the Talbot Arms, meeting up with local resident Hayden White who was enjoying an early evening pint (as he occasionally does!).

Then it was back home through the woods and Bumpy Field, full of dog owners exercising their pets.

We had probably walked around six miles, more than I’m used to, but it made me think about how lucky we are to have such opportunities on our doorstep and how rarely I had taken advantage of it for much of my life.

Michaela to serve as mayor for another year

COUNCILLOR Michaela Ellis has been elected to serve another year as Mayor of Lyme Regis. […]

Here's this week's video news bulletin from LymeOnline, bringing you up to speed with all the top stories from Lyme Regis! #lymeonline #lymeregis #dorset https://t.co/QaP4HwtoMK
View on Twitter
0
2

Here's today's digital edition of the LymeOnline newspaper - flick through the pages on screen via our website to catch up with all of this week's Lyme Regis news! #lymeonline #lymeregis #dorset https://t.co/RtJZKYLfBm
View on Twitter
1
0