I AM of an age that I can remember when Lyme Regis Police Station in Hill Road was manned by one sergeant and at least four constables.

As kids we were pretty much afraid of them. It was in the days when parents would threaten you with being taken to the police station if you misbehaved.

I still have vivid memories of one such occasion. We got caught stealing apples from Braggs Stores, now The Lyme Bay Cafe in Bridge Street. We would run down the town and as we sprinted past the shop we would nick an apple from the fruit boxes outside and keep on running.

On this occasion, however, a copper was waiting for us and he frog-marched us back to the shop to return the apples and apologise. Then he told us he would be speaking to our parents about it.

My Mum was out to work and I was so scared I put myself to bed – at three o’clock in the afternoon! Can you imagine that happening today? “I’m marching you up to the police station for pinching apples”. “Yea, whatever mum.”

I can also remember getting in a bit of bother over cutting down some Christmas trees when we received another knock on the door.

As a consequence we grew up respecting the Long Arm of the Law and when I was much older I witnessed an incident at one of the Marine Theatre’s Big Beat nights in the 1960s which demonstrated one of the great differences between policing in those days and the police today.

A group of lads from Sheffield were causing a bit of trouble outside the Marine and the rozzers, as we often referred to them in those days, were called – one sergeant and two constables. The ringleader called the sergeant “Stripey” prompting the sergeant to remove his metal torch from his belt and hit him square in the face with it, drawing blood, followed by the instructions: “PC Jones, take him to the hospital.” The other three lads scarpered quickly and we were left dumbstruck.

I’m not suggesting for one moment that’s how such incidents should be dealt with today, but we never took any liberties when that sergeant was on patrol when the Marine turned out at midnight.

Memories of how Lyme used to be policed and the rare sighting of a Bobby On The Beat today were stirred when I attended a recent meeting of Lyme Regis Town Council when the Police and Crime Commissioner Martyn Underhill, accompanied by Neighbourhood Inspector Darren Stanton, attended to answer recent concerns about the lack of a police presence in Lyme.

It was somewhat ironic that 18 hours after explaining why you rarely saw a policeman in Lyme, a posse of masked and armed coppers appeared outside of Tesco to make an arrest. Was Mr Underhill making a point? Obviously not. It was a real incident which distressed a number of shoppers inside the supermarket as two men were arrested in the street and have subsequently appeared in court.

As a young reporter it was necessary to have a good relationship with the police on the patch that you covered. In those days we would call at the police station every day and the desk sergeant would take you through the incident book. Occasionally, he would say “better not mention that one yet” as an arrest was imminent. We never let them down, for if we did we knew the relationship was over.

Those days are long gone. All information now comes through a press officer and the details are often very sketchy for the fear of the populace thinking crime is rife.

Lyme, of course, is a low crime area, although like most small towns in the South West, drug issues seem to be on the increase and burglaries are often fuelled by the need to sustain a drug habit.

When the Tories introduced Police and  Crime Commissioners in 2012 I was not a great supporter of the idea, thinking that their salaries (£80k to £100k) could be better spent on more feet on the ground. But of course, it’s not that simple.

This was the first time I had heard Mr Underhill speak and I have to say I was most impressed, as I think most if not all of the councillors were as well.

With more than 50 per cent of our council tax going on policing, and with another big hike on its way, many in recent weeks have expressed the opinion that Lyme is not getting its fair share of the policing budget. But Mr Underhill, with some operational explanations from Inspector Stanton, soon put that argument to rest, explaining in detail how the police precept was made up and outlining the policing priorities in this digital age.

Much of police work today revolves around fraud, especially in Dorset where there is a high proportion of vulnerable old people. The perpetrator would not necessarily be operating from Dorset, they could anywhere in the world, but Dorset Police would have to meet the cost of investigating. There’s a very cogent argument that says this should surely be financed nationally.

A fact I was unaware of was that there has been no government subsidy for policing for three years – it all comes from the precept, much if which goes on police pensions.

Mr Underhill also expressed his disappointment that the proposed merger between Dorset Police and Devon and Cornwall was not going to happen because his counterpart in Devon, Alison Hernandez, was opposed to the idea. He believed this was not good news for Lyme Regis which would have gained much by being slap in the middle of the new combined police area, rather than out on a limb.

But he has not given up on the idea. He predicted that mergers would be very much back on the agenda if there was a change of government in the near future, or even if there was a new Prime Minister as Theresa May, a former Home Secretary responsible for policing, was also strongly opposed to police forces merging.

Inviting Mr Underhill to a council meeting was a good idea. He’s clearly frustrated by many of the restrictions that have been imposed on his ability to keep the people of Dorset safe but continues to fight his corner for more resources. 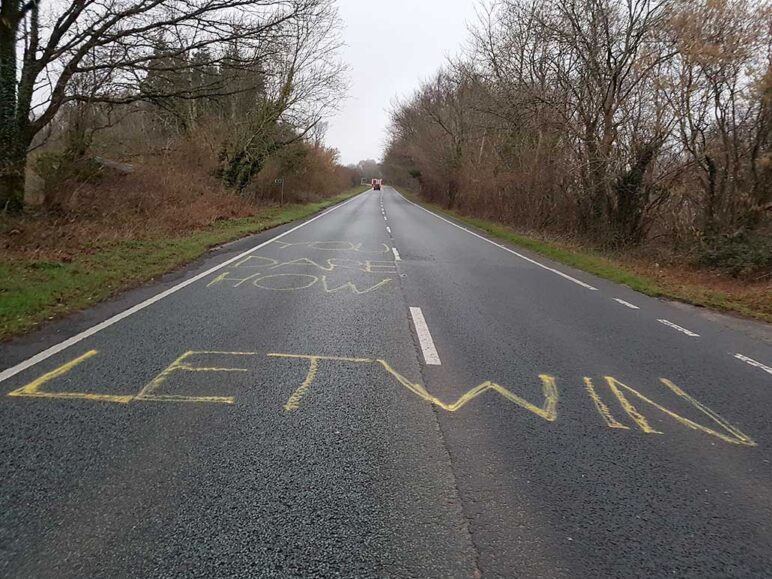 WEST Dorset MP Sir Oliver Letwin was a crucial member of David Cameron’s Cabinet and was at the very heart of government. But no more.

Theresa May soon dumped him and he was relegated to the back benches again. He will deny being affronted by his demotion but many in the constituency believe he is getting his own back by not being wholly supportive of her in the Brexit debacle.

Sir Oliver, thought to be serving his last term as our MP before going to the Lord’s, joined forces with Labour’s Yvette Cooper to force the government to hand power to parliament if no UK-EU withdrawal is approved, a move that undermined his Prime Minister.

Such action may well have been the reason why one of his constituents went to the trouble of painting “How Dare You Letwin” on the A35 near Lyme this week.

A WORD of congratulations to my favourite Lyme Regis organisation – the Regatta and Carnival Committee.

It’s where I cut my teeth on community work, having spent ten years as secretary from 1969 and the role that gave me the confidence to speak in public and led me to compering a number of events all over the country, including the National Carnival Queen contest at the Lyceum Ballroom in London’s West End.

The carnival committee have announced this week that they are making donations of £12,750 from the proceeds of the 2018 Regatta and Carnival Week to local groups. In all 26 local organisations will benefit from their hard work.

When you consider that the committee consists of just ten people, it is incredible that they put on such a comprehensive programme of so many events with so little manpower. It takes all year to plan the programme and much effort also goes into other events in the year organised by the Regatta and Carnival Committee, including the Easter Bonnet Parade and the May Fete.

Talking of local events, it’s a great shame the Red Arrows will not be performing in Lyme this year breaking a tradition that goes back more than 40 years when I brought them to the town for the first time as part of regatta week.

Last year when Red Arrows Day was abandoned because it clashed with one of the engineering days, the town council promoted a ‘I Love Lyme Day’ which turned out to be quite a fun time.

Several people have asked whether there will be another one this year. Unfortunately, the answer is no, mainly because there will be a new council in place after the May elections and there will not be enough time to organise it.

However, council staff are anxious to build on the ‘I Love Lyme’ brand in future and have not abandoned the concept completely.

EMERGENCY services spent the night looking for a missing man believed to be in the West Bay area. […]

IT wasn’t quite the celebration Seb Cope had in mind when he announced his 35th birthday to volunteer colleagues at Lyme Regis lifeboat station. […]

THE sad news of the passing of former leader of the Lib Dem’s Lord Paddy Ashdown is a great loss to the country, his family and all who knew him. […]

Lyme Regis traders have made complaints about the harbour dredging and beach re-profiling works, which have clashed with easter holidays and the reopening of many businesses #lymeonline #lymeregis #dorset https://t.co/bfw1WjDpwi
View on Twitter
1
3