SOON after it was announced that I was to receive the MBE in the Queen’s Birthday Honours, I was stopped in Broad Street by someone who has never been one of my greatest admirers with the following question: “I suppose now you’ve got a gong you’ll stop all the stuff you do in Lyme?”

Well, no. I have decided that I will cut down on the amount of public speaking I have done over a number of years, mainly a talk on my half-century involvement in the newspaper industry.

At 70 and as one who never uses notes, I’m conscious that my memory at some time will let me down and I might dry up. Mrs E has promised that when I get to that stage she will be the first to say “that’s enough”. I suspect that time is rapidly approaching.

But I intend to carry on supporting and do as much as I can for those organisations which have been good enough to make me their president, i.e. the Royal British Legion, the football club and Lyme Regis Musical Theatre.

I will continue to chair the Cancer Research UK Lyme Regis as our small committee works towards raising £200,000. And I shall carry on for a while yet as chairman of the Woodmead Halls management committee until I can find someone to take over the reigns.

Having messed around with newspapers for the whole of my working life and struggled through the last few years which has seen the demise of local newspapers all over the country, I often question whether I have actually achieved anything of real consequence.

I’ve enjoyed the vast part of my career, having worked with some wonderful characters and employed some really talented young people.

Having launched not far off 70 different publications in that time, I have also probably been responsible for the felling of thousands of trees. So I thought it was about time that I contributed something more positive to this planet.

When I went to Buckingham Palace recently to receive my MBE I met dozens of amazing recipients who have made a real difference to people’s lives; those who have served this nation with bravery in the Armed Services, cared for abused children, nursed dying children. To be honest it made me feel a bit of a fraud and to question why I was there.

I mean no disrespect here to a number of people who worked extremely hard over many years to ensure my service to the community of Lyme was honoured in some way. I didn’t know they were doing so and I never expected that one day I would be shaking hands with a future King.

They presented me with a book containing recommendations from numerous people I have worked with and alongside over the years. I still haven’t been able to read it in its entirety. When I started I didn’t recognise the person they were talking about and hopefully I will be able to do so when the emotion of the last few weeks subsides.

I have no intention of retiring completely from publishing this newspaper. But my contribution is negligible with Francesca running the show.

So – don’t laugh – I have decided to register as a Hospital Help volunteer with the NHS following a campaign by The Daily Mail to recruit as many as possible to help ease the staffing shortages in our local hospitals, a campaign that to date has generated 26,000 applications.

I’ve offered to do one full day once a month for six months and hopefully longer if I am accepted. Registration does not necessarily mean I will be accepted with all sorts of checks having to be carried out.

There is one other reason why I would like to contribute something to the NHS – for the treatment my wife received when she endured cancer and the care shown to me when I suffered a stroke several years ago. It’s a way of saying thank you to the brilliant doctors and nurses who day in, day out, do such an outstanding job.

That in itself is a good enough reason and I’m actually looking forward to it.

WHILST I write about volunteering in this column, I would like to mention the excellent work undertaken by LymeForward in organising the monthly community lunches and getting the memory club off the ground.

They invited me recently to one of the lunches, a excellent two-course menu for just £6 and attended by around 30, many of whom live on their own and were pleased to be making new friends. I take my hat off to the volunteers who help at this event.

I sat next to Desmond Perryman, who used to run an electrical company in the town, and it turned out that we are related. His grandmother and mine were Homyers and cousins.

The memory club, in its early stages, is also an excellent initiative which will be a tremendous help for those who struggle with the demands of everyday life as they get older. 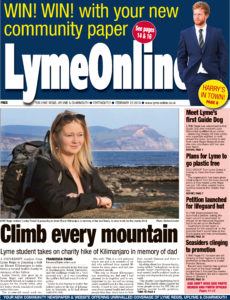 Thank you for your support

WHAT a year it’s been. It started with the distressing demise of the View From, the group of newspapers I launched in 2005, greatly missed in the towns where we operated, and the appalling treatment of the staff, many of whom had worked for me for many years.

I spent last Christmas worried about what would happen to them and what the future held for the Evans family. Newspapers were our life, it’s all we knew. We were employees, not owners, like the rest of them but I knew we would never be employed again in the failing local newspaper industry.

But I believed in how important a local newspaper could be in a small town like Lyme and hatched the idea of launching the LymeOnline website and fortnightly community newspaper over the New Year period.

I was aware that similar projects were springing up all over the country. But I also knew that a small town like Lyme could not sustain such a publication through advertising revenue alone. Regretfully, those days are long gone.

I came to the conclusion that such an idea could only be run as a community non-profit operation and I had to find other ways on making it sustainable. So I packed Francesca off to Galway in Ireland where her sister, a good designer and website builder, lives and gave them two weeks to build the LymeOnline website.

The website was an immediate success and we set about launching a fortnightly newspaper specifically aimed at those who did not embrace social media and the internet. And so the first edition of LymeOnline printed version was launched in February, with Fran-cesca having full editorial control, and we were astounded by its popularity.

In the interim three local businesses came forward and offered to sponsor the print cost of the newspaper, such was their desire to see it work. They wish to remain anonymous but without their support it would not have been possible to launch such a publication.

A few advertisers have rallied around to support us as well and we appreciate their ongoing support.

To them, our distributors, including volunteers, and all our readers, may I wish you a very happy Christmas and let’s hope 2019 will be a good one for our town and all of us who are fortunate to live here.

Festive Lyme does it again!

ONCE again Lyme Regis has risen to the occasion and produced the most spectacular Christmas lights in the area. There’s always great expectation of what the festive lights will be like before the big switch-on and we are rarely disappointed.

After seeing them, I always ask the question “what would Barbara think of them?” Barbara, of course, is the late Barbara Austin MBE who was instrumental in forming the Lyme Regis Christmas Lights Committee because the town’s seasonal decorations were so poor.

When Barbara died a few years ago those who worked so hard with her raising the necessary funds decided they had to carry on and ensure that Barbara’s legacy was honoured.

Former mayoress Christine Lovell took over as chairman and with the help of a small but active group of helpers the Lyme Christmas lights are still the best in the area. But it takes a lot of effort.

The Bridport and Honiton lights are also pretty impressive and it’s good to see that, at long last, Axminster now has a committee which is making the town look much more festive.

Lyme’s great asset, of course, is our steep main street. Whichever way you look, up or down Broad Street, you can see all the illuminated displays whereas if it is a level street the effect is not so spectacular. I think this year’s white and gold displays, particularly the dripping icicles, look really classy.

A pat on the back also for the local shops, hotels and pubs which have made a special effort. I don’t think I’ve seen Lyme look so festive.

On the subject of local traders, and with my football club president’s hat on, can I say a warm thank you to those who gave so generously for our Christmas auction which raised £1,600 for the development programme at the Davey Fort.

Throughout the year the traders get requests to provide prizes for raffles, etc. and they respond in great numbers, helping to raise thousands of pounds for the many good causes in the town. Not every town is so generous.

END of life charity Marie Curie is calling on residents of Dorset to support its flagship fundraising campaign, the Great Daffodil Appeal. […]

LYME Regis Town Council may scrap its community grants for local organisations this year, due to the financial pressures of the coronavirus pandemic. […]

A busy festive season at the Marine Theatre

A COMPLIMENTARY screening of classic Christmas film ‘It’s A Wonderful Life’ on December 22 will be the culmination of a busy festive season at the Marine Theatre in Lyme Regis. […]