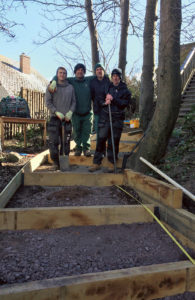 WELCOME to the first of the council’s monthly column with LymeOnline. This is a great opportunity for the council to share useful information with the local community, including progress on projects, problems we might be facing, our successes, and updates on issues we know the town is talking about.

Although it might sometimes appear the council isn’t doing anything about a major local issue, we’re working hard behind the scenes to get a result. An issue which might seem relatively simple to resolve is often complicated by matters beyond the council’s control, such as tight budgets, rules and regulations, and reliance on other organisations.

The council is just as frustrated as the community that issues such as the park and ride, cash machines and traffic congestion are rumbling on. But rest assured, we haven’t forgotten about these things and are doing all we can to resolve them.

The council has a meeting almost every week but the public gallery is usually empty. We would encourage the public to come and see what really goes on, listen to the debate, and even speak in the public forum.

So here’s an open invitation to Lyme Regis – check out our calendar of meetings, find something you’re interested in, and come along to a meeting.

THE steps leading from the Town Mill to the Broad Street car park have been revamped by the council’s external works’ team.

The wood had rotted out and the uneven ground was becoming hazardous. The team has completely re-built the steps, concreted sections, levelled the slopes, and installed handrails on both sides.

Our gardening apprentice has been asked to come up with a planting scheme for the area and work will start soon.

Park and ride is our top priority!

PARK and ride is at the top of our priority list. It’s essential for our town and we are well aware of the need to have it in place by the Easter holidays.

Let’s start with the positives. The landowner of the Charmouth Road park and ride has applied for planning permission to extend the period of operation beyond the six weeks of the summer.

We know West Dorset District Council is making every effort to deal with the application quickly, so with any luck, park and ride will be in place by Easter. The council has also found a bus company to operate the service, which is ready to go as soon as we give the instruction.

Sidmouth Road park and ride is an entirely different matter. As the council is not the landowner, the planning authority, or the local authority where the land is situated, we’re relying on the support of others to make this work.

It’s now clear we will only be able to obtain temporary planning permission for 2018, and any permanent permission in future years will depend on us producing a transport and parking strategy for the whole of the town.

We’ll be paying a five-figure sum for this strategy, but the council believes it’s money well spent if it means securing park and ride for the future.

When the planning application is submitted, it stands a better chance of being approved if it has the support of the local residents, businesses and visitors.

Letters or emails can be sent to East Devon District Council and we would encourage the community to show its support.

Joining the fight against plastic waste

THE war on plastic waste is gaining global momentum and the town council is determined to play its part in the fight. We’re joining forces with Turn Lyme Green to try and reduce the amount of plastic materials used in the town, particularly single-use plastic, such as cutlery, straws and cups.

Lyme Regis is already playing its part with regular beach cleans, and initiatives like the ReFill scheme providing free tap water to refill water bottles, but more can be done.

Aside from the obvious environmental benefits this campaign will bring, it will also help reduce waste, save money, bring about higher quality products, and help promote the town to an increasingly informed and demanding public.

The campaign will include working with local businesses and organisations to reduce single-use plastics, engaging with young people and families, and educating residents and businesses on plastic waste separation.

The council has its own part to play in this campaign and is working towards removing single-use plastic items from our premises and operations.

THE cash machine crisis of 2017 is never too far from our minds, with the added worry that we’re approaching the peak season and, seemingly, not much has changed.

Although it isn’t the council’s responsibility to provide cash machines, our attitude is generally if we can do something to help, we will.

We’ve agreed to pay for a stand-alone machine to be installed at Bell Cliff. Provided by Cash Zone, it will be free to use. If all had gone according to plan, the machine would have been installed at the end of January.

Problems with the electricity supply have held up progress, but we’re hopeful it can be resolved soon.

In the meantime, we understand a cash machine will be installed any day now at Arthur Fordham & Co, the hardware store in Broad Street, which is great news.

THE public toilets on Marine Parade will undergo major refurbishment over the next few months.

Tens of thousands of pounds will be spent on improving the toilets next to the amusement arcade, with work expected to start after the Easter holidays.

The new unisex toilets will have an improved ventilation system, ceramic toilets, new sinks with state-of-the-art taps and hand dryers, a bespoke sink and dryer for children, baby changing facilities, floor-to-ceiling cubicles and doors, and a new plumbing system.

The disabled toilet will be retained but access will be available from the outside of the building.

The new and improved toilets will be re-opened by the summer holidays. In the meantime, a luxury toilet trailer will be situated on Marine Parade to help cope with demand.

Lyme’s major festivals could be banned during peak season

MAJOR events and festivals could be banned from taking place on Lyme Regis seafront during the peak season as of 2019. […]

‘We need maturity, care and respect for others’

I’D like to congratulate both Philip and Francesca Evans of LymeOnline for what they both do for the town and in what is a challenging industry. […]

MORE police officers on the ground and a crackdown on anti-social behaviour. Those were the pledges made by Dorset’s new Police and Crime Commissioner (PCC) David Sidwick when he visited Lyme Regis recently. […]