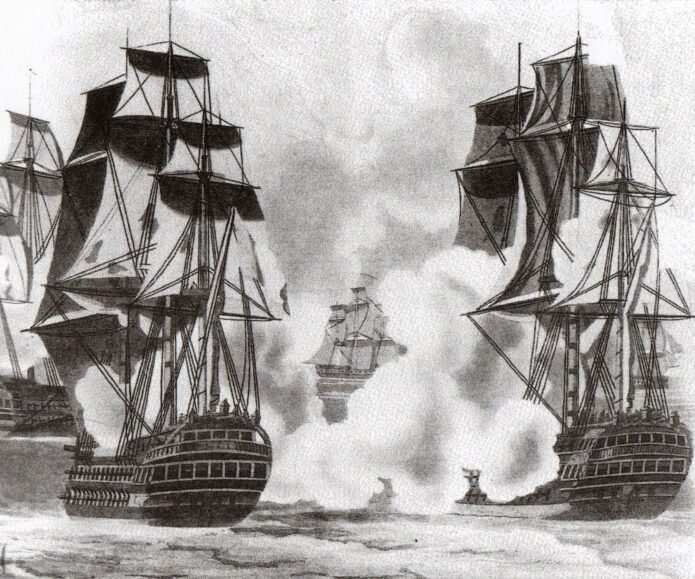 ON October 21 1805 an historic sea battle took place off the dangerous Spanish coastline between Cadiz and Cape Trafalgar.

A British fleet of 27 man-of-war battleships, under the leadership of Admiral Lord Nelson, defeated a combined French and Spanish fleet of 33 warships. It was a battle that became part of our maritime heritage, although the victory was overshadowed by the death of Lord Nelson during the battle.

The records reveal that there were four men from Lyme and one from Uplyme who took part in the five hour battle. The most senior of the Lyme men was Lieutenant Francis Roskruge of the 100 gun Britannia.

Apart from his general duties as Second Lieutenant he was the ship’s signal officer, an important role in a warship. He invented a system of fleet night signals and sent a copy to Nelson a few days prior to the battle. The Admiral responded making the comment “that in many respects your signal book is ingenious, however I fear a multiplicity of signals could cause confusion”, nevertheless he thanked Roskruge for his diligence.

An eye witness account states that during the battle “Roskruge was on the lower gun deck when he was bought down senseless with a severe head wound from which he died later without regaining consciousness”.

William Saunders, a volunteer seaman rated ‘able bodied’, served on Nelson’s flagship the Victory. He survived the battle and returned to Lyme.

The 1851 census records him as a ‘mariner living at Church Cliffs’, he died in 1856 aged 86 and was buried in a part of the churchyard that became subject to landslip. His remains were probably deposited in the sea, a fitting final resting place for a seaman.

Also on the Victory was Francis French. Also rated ‘able bodied’, records reveal he was a ‘pressed man’, probably taken from a merchant ship. He continued in service until invalided out in 1841.

Serving on the Royal Sovereign was Thomas Hounsell rated ‘landsman’, a term used for anyone who had never been to sea before. He retired with a naval pension and lived in Horse Street. He died in 1868 aged 85 and is buried in the cemetery.

Serving on the Orion was marine (seagoing soldier) Stephen Fowler of Uplyme, another naval pensioner. He died in 1857 aged 76.

Awards from a Government Fund of £300,000 was made to those who took part in the action. Roskruge’s grant of £161 would have gone to his next-of-kin. The other four each received £4-12s-6d plus any prize money, Saunders and French had Victory prize money of £1-17s-6d each.

Maybe Roskruge’s name should be on the town’s war memorial, after all he died serving his country in what was Britain’s most epic sea battle.

Trafalgar became a popular name for merchant ships. In 1806 Henry Chard of Lyme built a single-deck 75 ton cutter of that name.

Thanks to Graham Davies of the museum’s research team for providing details from the parish records.

AN an exciting new weekly programme for autumn, Lyme Regis Museum will be working with local poet and writer Sarah Acton to offer creative writing afternoons celebrating the town’s heritage.  […]

THE expansion of Lyme in the 19th century was restricted by its topography, this led to buildings being congested and therefore fire was a major hazard. […]

Throw a stay at home garden party for VE Day!

RESIDENTS of Lyme Regis, Uplyme and Charmouth are being encouraged to throw a ‘stay at home garden party’ to mark the 75th anniversary of VE Day on Friday, May 8.  […]