GREAT angst among the dog lovers of Lyme over the Bank Holiday period concerning the number of pets left in locked cars during the sweltering temperatures.

Police were called on a number of occasions with vehicle windows having to be smashed to rescue the dogs during the heatwave. I’m not a dog man, mainly because both my wife and daughter are allergic to animal fur. But it just amazes me that some dog owners can be so careless and cruel as to put man’s best friend in such danger.

Numerous postings were made on social media calling for the culprits to be punished and with dog ownership more popular than ever there were calls for a dedicated dog warden to be employed by the town council.

Another unseemly sight was the number of dogs being dragged along the Marine Parade clearly distressed by the heat.

Lyme already employs three enforcement officers (one of them seasonal) to look after car parking and curtailing dogs on the main beach.

Generally speaking they do a good job but it’s doubtful they can deal with every dog incident during the season.

At the same time there has been increased complaints about the amount of dog mess around the town’s streets. Ninety per cent or more of dog owners are responsible people and clear up after their dogs, but it doesn’t take too many less responsible ones to give the town a bad name.

Lyme council employed a dedicated dog warden, Derek Hallett, for ten years when the dog mess issue was at its worst. Mr Hallett succeeded in getting the town clear of the mess but in doing so made himself hugely unpopular with some and on occasions was physically assaulted.

To their shame, town councillors in those days gave Mr Hallett very little support and no prosecutions were ever attempted. Actually, I think I am correct in saying that no dog owner has been prosecuted in Lyme for knowingly allowing their pet to foul the sidewalks or beach, just final warnings.

We keep hearing that Lyme’s a rich council (how much longer that may last is open to debate) so perhaps it would be possible to employ a dedicated warden again, even if it is just for the summer months.

With dog ownership so popular (many families have more than one), being a dog friendly town has great advantages. There’s much to be said also for a town with streets free of dogs mess. 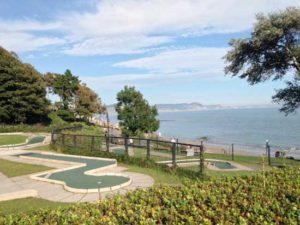 IT is pleasing to see that Lyme Regis Town Council has set out its objectives for the next five years including the refurbishment of the Langmoor and Lister Gardens.

There has been severe criticism from inside the council chamber about the condition of Lyme’s public gardens, for so long the jewel in the crown of Lyme amenities.

Councillors must take some responsibility for this and not lump it all on the outside staff. How often had they inspected the gardens themselves as they deteriorated?

It would seem the air has been cleared and great efforts are going into bringing the gardens back to their previous glorious state.

On behalf of all the grandads out there, can I express the hope that some attention can be given to the recreational attractions in the gardens – namely the crazy golf course and putting green.

Crazy golf has been hugely popular this year, and whilst this won’t be high on their list of priorities, the 18 holes are starting to look a bit tatty to say the least and could do with one or two more interesting obstacles.

I’m not even sure the putting green is open any more.

Can a councillor have a day off?

I ASK this question after a mild spat with Lyme’s ebullient deputy mayor Jeff Scowen. Jeff is undoubtedly king of the social media clan in Lyme, having set up his own ‘Pride In Lyme’ Facebook page which he uses to promote his own bizarre videos and postings on all matters Lyme.

Being old-school, I’m a bit wary of social media. I have to accept that in these digital days its a bona-fide media in its own right, but there’s an awful lot of misinformation on the Lyme sites, some of which is taken for gospel.

When Jeff announced on ‘Pride of Lyme’ last week that he had it on good authority that there were plans for two apartments at the rear of the Regent Cinema to meet the cost of Lyme getting its much missed cinema back, I questioned its accuracy as numerous enquiries to the owners in the past resulted in us being referred to their website which made no mention of such plans.

I rarely, if ever, respond to any Facebook stuff but on this occasion I posted that I thought it was dangerous for councillors to post information that had not been confirmed, especially on such a sensitive matter as the Regent Cinema.

Jeff came back in a flash that he was writing as an individual and not a councillor as was his entitlement. My response to that was that, as deputy mayor, he had a greater responsibility.

So can you take a day off from being councillor when it suits you or is it accepted that when you get elected you sign up for a 24/7 commitment?

There might be a little bit of sour grapes here as Jeff got the story first. We checked it out after the Bank Holiday and a statement from the owners of the Regent confirmed that Jeff’s source was indeed right on the button.

There are some in the town who don’t want to see more luxury apartments in Lyme, arguing that there’s a much greater need for more social housing, especially for young couples.

Having a young daughter who lives in the town, I have some sympathy for this argument but we are never going to curtail the huge demand for expensive property in Lyme because of our popularity as a holiday resort.

However, the Regent has been sorely missed since it was destroyed by fire in March 2016 and if two more apartments with views over Lyme Bay is what it takes to get our cinema back, I think I will go along with that.

So I can’t complain about the authenticity of Jeff’s information. It was spot on. We report on the Regent Cinema development on this website, safe in the knowledge that far more people will read here and in our printed paper than see it on Facebook.

But I am still a bit miffed that he scooped us, not for the first time I might add!

We all ‘Love Lyme Regis’

I BUMPED into Rob James on Saturday, the creator of the ‘Love Lyme Regis’ videos and website.

Rob is an experienced digital media expert whose talents have been used by a number of local businesses to up their image on digital platforms.

I had never met Rob before but I’m a huge fan of the ‘Love Lyme Regis’ videos which receive tens of thousands of hits and show our town at its charming best.

Rob is also helping out a few local organisations as well, boosting their presence and helping to maximise their publicity, one of which is the Lyme Christmas Lights Committee.

If I was running Lyme town council’s tourism and publicity committee, which I did back in the day, I’d be quick to get him on board to come up with an alternative to the outmoded and hugely expensive town guide and replace it with something more beneficial and productive.

WITH all meetings of Lyme Regis Town Council being suspended due to coronavirus, the Mayor, Councillor Brian Larcombe MBE, has agreed to answer questions that we will put to him on your behalf and we will then publish his responses. […]

TOWN councillors are considering the erection of temporary sculptures on Lyme Regis beach for six weeks in the summer to encourage people not to litter. […]

“PERHAPS one thing the virus has shown us is what really matters, what the important things are.” […]