EVERY year I find myself writing in this column that Lyme’s Christmas lights are “the best ever”.

So there’s a certain irony that in a year when the big switch-on, which attracts thousands to Broad Street, could not be held, our town’s festive illuminations, are undeniably “the best ever”.

One can only surmise how many people would have crowded into our main street had the switch-on ceremony taken place, given the fantastic response to this year’s lights.

Despite the difficulty of fundraising this year, there was no way that the Christmas Lights Committee, under the excellent leadership of new chairman Rob James, would abandon their determination to ensure Lyme would look as festive as possible.

In fact, in a bid to improve the town’s morale it was essential that the town’s much-admired illuminations went ahead and that was why the lights were turned on a week earlier than normal.

LymeOnline got an email from the organisers on Saturday informing us that the lights would be switched-on in a low key gathering that evening but were asked not publicise this for fear of a large crowd gathering in contravention of the COVID-19 restrictions.

The honour of pressing the ‘on button’ went to champion fundraiser Joshua Denning in the presence of the mayor and mayoress, Brian and Wendy Larcombe, and committee members.

LymeOnline filmed the turning-on live on Facebook, which has been viewed by more than 8,000 people.

Rob James also filmed the event, showing the lights in all their glory, for his hugely popular Love Lyme site which was seen by in excess of 100,000 people. You can’t buy that sort of publicity, a fact I hope is recognised by the town council.

Several people took to Facebook to say how disappointed they were not to have been able to attend the ceremony. The organisers, however, were left with no choice; they were unable to get insurance to cover the event due to the restrictions and, had the word got out locally, two or three hundred people might well have turned up.

As it was, the whole process was over in a matter of minutes and those who were watching quickly dispersed.

It’s interesting to learn that every year the committee has to raise between £10,000 and £15,000 to finance the lights. They made the decision a couple of years ago to buy the lights rather than hiring them, which is more cost effective, and also ensures a variety of displays for future years.

Lyme Regis Town Council contributes £4,000 every year to the cost of the lights, around £3,000 is brought in by sponsorship from generous local businesses and the rest has to come from fundraising.

This year the Christmas lights raffle, for example, has raised £2,500. In a normal year the committee would also raise money from other events, including a duck race, harvest home auction, bingo and summer stall on Marine Parade.

The biggest cost of all, of course, is the purchase of the illuminated displays (three new ones every year, followed by the cost of erection £2,000).

The erection of the Christmas trees above the shop is not part of the committee’s remit and is organised by Virgil Turner and John King who also put up and maintain the main lighting displays as contractors.

It’s a wonderful effort all round, so typical of Lyme. 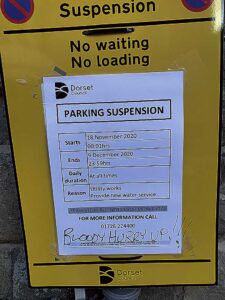 Get Broad Street clear for Christmas

WITH local shops coming out of lock down for the second time next week, hopefully in time for the Christmas rush, Lyme traders will be hoping that the road works in Broad Street will be completed.

With our main street looking staggeringly festive with Lyme’s best Christmas lights ever, it will be particularly annoying if the street scene is marred by ugly bollards and traffic signals during the holiday period.

When Dorset Council started work on the pedestrian crossing in Broad Street it was said the work would take three weeks to complete. The county agreed to suspend work for a week during half term, but shop owners are anxious that the crossing be completed well before Christmas.

Water utility works have also commenced in the town centre, resulting in parking being restricted in the main street. This should be completed by December 9 but the frustration of those having to put up with the noise and disturbance of the seemingly never-ending work was clearly demonstrated as an addition to the sign (pictured above left), which has ‘Bloody hurry up!’ scrawled across it. 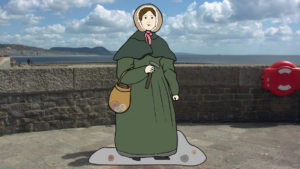 Where’s the best place for the Mary Anning’s statue?

THE fundraising appeal for the proposed Mary Anning statue was launched last week and had already reached £27,000 at the time of going to press. The organisers, Mary Anning Rocks, are hoping to raise £100,000 for the project.

As they edge ever closer to the target, discussions will soon get under way about where the statue should be sited, always a sticky subject.

It seems there are two possibilities – at Cobb Gate, near the anchor, or on Church Cliff Walk near to where Lyme’s most famous fossil made her most significant find – the ichthyosaur, which is on permanent display in the National History Museum in London.

The company which was has made the film ‘Ammonite’ about Mary Anning’s life, staring Kate Winslet and Saoirse Ronan, due to be released next year, made a payment of £15,000 to the town for disturbance, £5,000 of which went to the statue fund.

Where would you like to see the statue sited?

Say no to Gibraltar twinning

LYME Regis Town Council has been asked to consider twinning with Gibraltar.

Our councillors gave the proposal short shrift and I don’t think it’s never going to happen.

Lyme is already twinned with St George’s in Bermuda, stimulated by the connection with Admiral Sir George Somers, and with Barfleur in Normandy. There is no appetite for further twinning arrangements.

After the debate on this issue was published on the LymeOnline website, the usual nonsense of who pays for twinning trips was given another airing with the usually inaccurate references to “junkets for councillors”.

At no time has Lyme council subsidised any twinning arrangements. If the mayor or councillors go on any trips, they meet their own costs.

Building back his empire

Mark lost control of his restaurant in Lyme early in the COVID-19 pandemic but managed to buy back his popular Oyster and Fish House in Lister Gardens.

He has now acquired the lease of The Fox Inn at Corscombe, a former Palmer’s pub and a new experience for Mark. He opens the quaint village hostelry on his birthday, December 10.

I know only too well what it’s like to lose a business that you have built up from scratch and I wish him well in his new venture.

Another busy year for the town council

WE’RE now coming towards the end of the council year – and what a busy year it’s been.
[…]

THE Courtyard Gallery at the Town Mill in Lyme Regis will be hosting ‘Marking Time: Traces of Another Jurassic Coast’, an exhibition of work by West Somerset artists guaranteed to fascinate local residents, fossil enthusiasts and visitors in equal measure. […]

LYME Regis Town Council has made a proposal to take on the Tourist Information Centre. […]