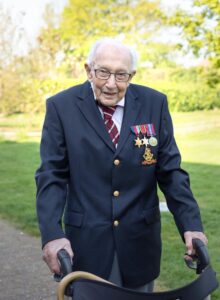 THERE has been little to celebrate these past few weeks but today the whole country is able to forget our woes and celebrate the awe-inspiring example set by Captain Tom Moore. Or do we now refer to him as Colonel Moore?

After receiving wonderful care in hospital after he fell and broke a hip, old soldier Tom Moore decided he would try to raise £1,000 for the NHS in return for the kindness shown to him by the doctors and nurses.

To do so he intended to walk up and down his garden path 100 times before his 100th birthday today. Well, you know the rest of it…

Captain Tom has raised an incredible £30million as his inspiring efforts won the hearts of people all over the world. He has received 135,000 cards of congratulations and has become the oldest person to have a number one record after the recording of ‘You’ll Never Walk Alone’ with singer Michael Ball.

He received a fly past by a couple of Spitfires and has been appointed an Honorary Colonel of the Army Foundation College, which had to be approved by the monarch. The college in Harrogate trains 16 and 17 year-old soldiers and he will be an inspirational role model to generations of soldiers

I doubt whether the Queen has been more pleased to send a card to a more admired centenarian and nearly one million people have signed an online petition calling for Captain Tom to be Knighted.

He has also been presented with his Second World War Defence Medal ahead of next week’s VE Day anniversary celebrations.

It’s not only this old soldier’s determination to complete his walk but the manner in which he has captured the spirit of the nation by the clarity and inspiring replies in the dozens of interviews he has faced from those clamouring to speak to him.

He seems totally unfazed by the strength of the admiration he has received and never forgets to thank those who have been so kind. He comes from a generation when good manners were paramount at all times and there’s so much we can learn from him in trying to come to terms with the difficult times we are experiencing.

It’s been refreshing to switch our thoughts away from our worries and frustration over putting our lives on hold and to remind ourselves that there is a ray of hope come what may – and no one is shining that torch more than Captain Tom on this historic day.

After stepping out on our doorsteps tonight to clap for carers, we should all return indoors and raise a glass to this fantastic, inspirational man.  I certainly will. Just think how proud his family must be.

Today is an important one for the government. It’s the deadline for meeting Health Minister Mark Hancock’s target of carrying out out 100,000 COVID-19 tests. Few expect him to actually reach that number even if they have the capacity to do so. Stand by for a media onslaught if the doubters are proved right.

New father Boris is conducting his first Cabinet meeting today since his recovery from coronavirus and the main item on the agenda will almost certainly be when and how lockdown lifting measures will be made public. He will also be conducting this afternoon’s live press briefing for the first time since coming out of hospital. Don’t expect any change from the mantra ‘Stay Home – Protect the NHS – Save Lives”.

Although I’m not a keen gardener, I have been grateful that we have a garden during this lockdown period. My job is to keep the lawns is good order. My wife and I disagree on how the flower bed should look. She favours having plenty of height, a wild-meadow look, whilst I prefer the municipal gardens look with neat rows of colourful flowers.

But at this time of the year we do seem to make several trips to the garden centres for plants, etc. but of course that has not been possible during lockdown. And as this is the busiest time for garden centres, the impact on their businesses has been disastrous.

When you are running a business during such times, all you really want is a level playing field with your competitors but that’s not been the case for the market gardens. Whilst they have had to shut up shop, supermarkets and now DIY stores have been able to sell horticultural supplies.

That hardy seems fair to me and I hope when the phased lifting of measures finally takes place that garden centres can be among the first to open. There always seems plenty of space at such places so social distancing should not be too hard to achieve.

Many look upon gardening as being therapeutic so the government could be doing us all a favour by relaxing the measures for garden centres as soon as possible.

To finish today’s diary I am going to quote Captain Tom, who when interviewed often finishes by telling people that “tomorrow will be a good day”. Over to you Boris…

Boris’ biggest challenge as he goes into intensive care

WE were half-way through Neville Causley’s brilliant virtual quiz last night, taking our minds off the coronavirus crisis, having plenty of fun aided by a couple of cocktails, when suddenly a news flash pinged onto my mobile phone saying Boris Johnson had been put into intensive care. […]