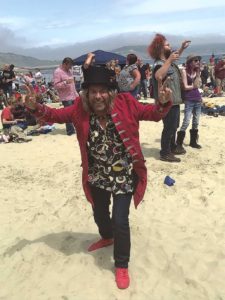 THIS is my favourite photo of the many that has shot across my screen since Jeff Scowen came to town. It was taken in 2017 when he was invited to compere Guitars On The Beach and encapsulates his gregarious character to a tee.

When Jeff waltzed into my office after arriving in the town he told me he would become mayor within a year. I said he had no chance, with only two former mayors having been elected to office in their first year on the council. There was also the question of actually winning a seat on the council first.

He wanted to bet me £500 that he would be wearing the mayoral chains within 12 months. I’m not a betting man but agreed to a £100 wager that it would never happen, the money to be donated to charity. He added a rider that the loser would have to run down Broad Street in their underpants. I was having none of it, obviously, but Jeff was more than up for it.

He lost the bet and paid up and we donated the money to Cancer Research UK. I couldn’t make up my mind whether he was a maverick or had a genuine interest in the affairs of Lyme.

Whilst Jeff failed to be elected mayor in his first year on the council, having won his seat in a by-election, he did get to become this year’s deputy mayor. He was clearly proud to have been elected as Brian Larcombe’s deputy and set about his duties with enthusiasm, appointing new councillor Belinda Bawden as the deputy mayor’s consort.

He also got to chair his first full council meeting when Councillor Larcombe was on holiday, although I thought it was a bit of a farce as the town clerk was also away and there were no items on the agenda other than approval of committee meeting minutes. No banana skins there then.

Jeff is a great advocate of social media and set up the ‘Pride of Lyme’ Facebook page to perpetuate all things positive about the town, though on occasions he strayed into local politics resulting in a number of controversial spats.

He also posted a number of short videos on various aspects of Lyme life, which showed Jeff at his most animated self.

In recent weeks his Facebook posts had become less frequent and I wondered whether he had been warned to tone it down from a council point of view. But then came the surprise announcement that he was standing down from the council and moving to Anglesey to be closer to his family.

You would find it hard to find two men more different in lifestyle than Brian Larcombe and Jeff Scowen. But Brian recognised that his deputy genuinely wanted to do his best for the town and paid a warm tribute to him after news of his resignation leaked.

So Lyme now faces another by-election at a cost to the council ratepayers of £7,000, having already shelled out a similar amount following Cheryl Reynolds’ resignation.

Although he may not be attending meetings, apparently Jeff’s resignation will not become effective until December 31. There’s a general election in five weeks. Unfortunately, this doesn’t give enough time to prepare for the by-election, if there is a call for one, to be held at the same time.

There comes a time in every ambitious man’s life when the call of family has to take priority. Whilst many were taken by surprise that Jeff Scowen was leaving the town, few will begrudge him his desire to be closer to his family.

The current town council will sit for five years to fall in line with the new Dorset Council. Usually it’s a four-year term. Barring health issues or the call of family, the town expects its councillors to sit for the full term.

Would Jeff ever have been made mayor? I have my doubts but, of course, now we shall never know. All I can say is – look out Anglesey, you don’t know what going to hit you!

Time to let the people of Lyme have their say

THANK you to those readers who took the time and trouble to put pen to paper and come up with possible solutions to Lyme’s ever-increasing traffic chaos. In our last issue we published two pages of your views, and there are a few more this week.

Clearly, a great deal of thought went into your suggestions; some had been aired (and dismissed) before and there were one or two more radical ideas, such as banning traffic altogether from Broad Street.

The people of Lyme were promised a public consultation after the publishing of the so-called traffic survey commissioned by the town council. This turned out to be no more than a parking survey and told us nothing we didn’t already know. A waste of £25,000 of public money.

It is important now that the people of Lyme get the opportunity to air their views in public and to question the experts – i.e. highways officers – on why some of the ideas put forward in the past have been so comprehensively rejected and whether some sort of trial could not be introduced to see if there is anything that can be done to ease the congestion in Lyme’s narrow streets.

The trading community obviously want to attract as many visitors to the town as possible, but we hear dozens of stories every summer of the frustrations of drivers trying to find somewhere to park. How many of them end up parking on verges, causing even more trouble?

How many of them give up completely and go onto to Seaton or West Bay, saying they will never come back to Lyme again? By not dealing with this, are we driving people away from Lyme?

Or is this a problem we will never solve and we have to grin and bear it for ever more?

The town council has agreed to hold an open day for the people of Lyme to have their say on important matters. Is this the opportunity to raise the traffic situation or should there be a meeting dedicate solely to the traffic debate?

And if that happens, will the council hold it at a time when the maximum amount of people can attend – not from 2pm to 6pm on a Thursday afternoon, the time chosen for their next public gathering?

Past efforts to attract residents have failed miserably. But is that any wonder when the time chosen is a Thursday afternoon, which immediately excludes most people who are working, and young people in particular. Far better to choose a day and time when more people are available – a Saturday, 10am to 2pm perhaps.

The town council does itself no favours by having meetings during the working day. It makes people come to one of two conclusions – 1) the council does not really want people to turn up; and 2) council staff don’t want to work on a Saturday, neither of which is true.

None so brave, none more worthwhile

IN my last column I wrote about the generosity of Lyme Regis people who never stop giving.

I was moved to do so by the reaction of recent appeals which raised fantastic amounts for young father Matt, who worked at Boots, fighting a rare form of cancer, as well as efforts to set up a charity to run the pre-school in Lyme.

I also mentioned the recent harvest home in aid of the town’s Christmas lights and went on to list a few of the other charities in the town which regularly hold events and call on the traders of Lyme to support them.

It’s always dangerous when you start making lists like this as you are bound of omit someone. And that’s exactly what I did.

It was remiss of me to fail to mentioned the unbelievable efforts of those who organise the annual Lifeboat Week in Lyme Regis, which this year raised the eye-boggling amount of £40,000 – by far the biggest amount for any one event.

When the Lifeboat Guild decided it was unable to afford paying for the Red Arrows to appear in Lyme, as they had for 40 years or more, there were fears that collections during Lifeboat Week would take a nose dive. But that was not the case, proof I think that the brave young men and women who save lives at sea, and those who work so hard behind the scenes, will always be a priority for those who give to charity.

My apologies I did not register this when I wrote about the generosity of Lyme last week.

Local restaurants step up to ensure no child goes hungry

LOCAL restaurants SWIM and RISE are getting behind a national campaign to ensure no child goes hungry this half term.  […]

AFTER 23 years of training highly skilled boat builders and furniture makers, Lyme Regis Boat Building Academy is proud to announce it is now a charitable company. […]

MEMBERS of Seaton Sea Angling Club have presented a cheque for £3,000 to the volunteers of Lyme Regis lifeboat crew. […]