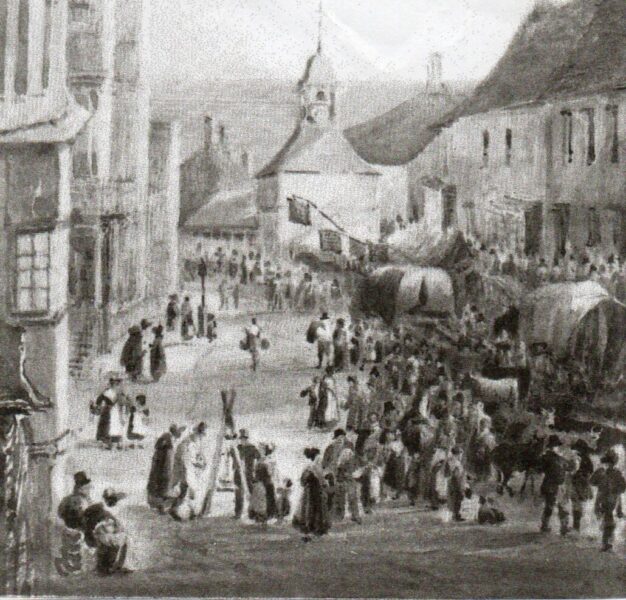 AFTER his first coastal voyage in March 1835,  William Brindle decided that a life at sea was to be his calling.

He spent his early years in the coal trade which included 18 months on the Iris voyaging to ports on the River Tyne. Coal was a very dirty cargo so it is no wonder that William decided ‘to go foreign’ sailing to Lisbon and Quebec.

In the 1840s he was engaged in the Newfoundland trade and witnessed the   great fire of 1846. It destroyed over 2,000 wooden homes and many warehouses that contained seal oil in the port town of St. John’s.

He states: “I never saw such a sight in my life and we only managed to save our vessel by moving her across the harbour.”

Life was tough and hazardous on a sailing ship. Food was mainly limited to salted meat and hard tack biscuits, with water going sour in the kegs during ocean voyages.

The seamen were often hungry and in bad weather wet and cold, there was also the danger of working aloft in strong winds and turbulent seas. He would have slept in a narrow wooden bunk on what was known as a Donkey’s Breakfast, it being a straw filled mattress.

William modestly claims: “It was roughish at times. I remember being frozen when there was ice all around the ship.”

He recounts seeing a very large iceberg: “It was a fine fellow about three times as high as Lyme tower and of course with two-thirds of its bulk below the surface.”

He was probably referring to the clock tower in the Shambles, which was destroyed in the fire of 1840.

While in the Mediterranean off the north coast of Sicily, he saw Mount Stromboli erupt and watched molten lava pouring down the mountain side. As a boy William would not have ventured far from Lyme, now he was seeing the world and had some fine seafaring yarns to tell.

Around 1848 he returned to coastal trading as mate in the Honiton Packet. He describes the vessel as one of the London Traders and states: “I was very glad to come home to old England.”

He put down roots when in 1850 he married Ann Gay of Uplyme. They lived in Church Street and raised a family of one son and three daughters and subsequently 14 grandchildren.

Their son died in 1883, leaving a widow but no family. Their son’s death caused them much grief; his wife became “delicate” and died six years later at the age of 69.

William describes Ann “as a good wife and fond mother who was troubled a good deal about my safety when I was at sea”. Evidently she made several voyages with him and, on one occasion in rough weather when she insisted on coming on deck, he had to lash her to the mast to avoid her being swept overboard.

Part III will reveal how in December 1852 William was involved in an ill-fated attempt by the Lyme Revenue Cutter to rescue passengers and crew from the wreck of The Heroine.

Signed copies of Peter Lacey’s novel ‘Touching the Past’ are now on sale in Lyme Regis Museum shop priced at £5.99.

World War One – A Naval Disaster

JUST five months after war was declared its impact was felt in Lyme Regis when the battleship HMS Formidable was sunk in Lyme Bay. […]