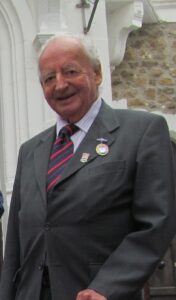 LAST week marked the end of an era at Lyme Regis Town Council as we said goodbye to veteran councillor and former mayor, Cllr Stan Williams.

He served this town and the council for over half a century, having been elected in 1969 to the then Lyme Regis Borough Council.

We are pleased we were able to recognise this exceptional service to the town last year by granting Cllr Williams the Honorary Freedom of the Town of Lyme Regis, the highest honour the town council can bestow.

The following is the official commemorative wording for the Freedom of the Town which encapsulates the contribution that was formally recognised:    “The council gives its full support to awarding Stanley Williams The Honorary Freedom of the Town.

“Lyme Regis Town Council grant you this highest honour we can bestow for the exceptional and devoted service you have given to the community and town council over the last 50 years.

“You have shown a tireless commitment to the prosperity and well-being of Lyme Regis, its economy, groups and facilities, residents and local good causes.

“Having been elected to serve on the council since 1969 you have held the positions of mayor and chair of many committees, in which you have brought considerable experience and genuine passion in representing the interests of those within a locality which has always been at the core of what you do and have done.

“It’s been a remarkable period that has presented challenges and difficulties which have become successes; Lyme is indebted to your selfless determination and service.

“A truly merited recognition to a Lyme man who has given a lifetime to his hometown and whom the town now honours with its freedom. Thank you Stan.”

The mayor, Cllr Brian Larcombe MBE, has led to the tributes to Cllr Williams.

He said: “Stan was passionate about Lyme. He committed his whole life to the interests of the town and its residents. He served on the council for over 50 years, bringing to it a special insight and experience of the town he knew so well.

“He was awarded the Freedom of the Town last year to mark the significance of his service and contribution to Lyme Regis and its council.

“He was very much his own person and true to his beliefs. He would often bring a thought or idea to council that had eluded others and with it a solution or level of sense that might otherwise have escaped the debate.

“Incisive and so often right if not always immediately appreciated – some simply needed a bit longer to ‘get there’. We’ll miss Stan for this; along with the time and support he gave to local groups and charity fundraising over the years.

“I will personally miss his friendship, support, determination, ability and humour, and the personality that was Stan. Wendy and I offer our sympathy and condolences to Anita, Paul, Shirley and family.”

OUR enforcement officers have recently been subjected to abusive and aggressive behaviour from dog owners and this will not be tolerated.

The council has a zero tolerance policy to this kind of behaviour towards its staff and will not hesitate in reporting incidents to the police.

Since the introduction of the new Dog-Related Public Space Protection Order (PSPO) in January 2021, our officers have found it increasingly difficult to do their job in advising dog owners of the rules.

Although dogs continue to be allowed on Front Beach between October 1 and April 30, the PSPO introduced a new rule that they must be kept on a lead.

While some dog owners are genuinely unaware of the changes and are happy to put their dogs on a lead when asked by our enforcement officers, there are others who are less willing.

Our officers have been subjected to verbal abuse, shouted and sworn at, called obscene names, accused of targeting lone females, and derided on social media – just for doing their job.

The enforcement officers deserve to be treated courteously and with respect for the work they are doing to make Lyme Regis a safe and pleasant place.

The officers come to work to do their job to the best of their ability and one of their roles is to effectively enforce the PSPO – they are not paid to tolerate abuse and aggressive behaviour from people who disagree with the rules.

The most unfortunate part of this is that these people are local dog owners who are well aware of the rules but choose to ignore them to prove a point.

Up until now our enforcement officers have taken a ‘softly softly’ approach and rather than issuing fines, they have tried to educate dog owners on the new rules.

To be very clear, allowing a dog to be off a lead on Front Beach between 1 October and 31 April is a criminal offence and failing to provide an enforcement officer with a name and address when asked is a further criminal offence.

Our position has the full backing of Dorset Council, which introduced the new PSPO, and our enforcement officers are authorised under the order to issue fines.

Cllr Laura Miller, Dorset Council’s portfolio holder for Customer and Community Services said: “Abusive behaviour toward enforcement officers is completely unacceptable and will not be tolerated.

“Regardless of how people feel about the rules regarding keeping dogs on leads on the beach during the winter months, officers are merely trying to do their job under challenging circumstances.

“They certainly do not deserve to be sworn or shouted at, or targeted via social media or vexatious complaints.

“The PSPO has been put in place to protect the public when using public spaces; both from the point of view of public health – the use of the sand as a toileting area – and to prevent dogs interfering with beach users.

“At present, officers are trying to verbally inform and educate those who are knowingly or unwittingly breaking the rules, and they haven’t issued any fines to date. However, if this behaviour continues we will not hesitate to crack down harder on repeat offenders by fining them and even taking further action if we feel it’s appropriate.

“The current PSPO will be reviewed in two years’ time and will be subject to a public consultation so local residents can politely express their views.

“But, in the meantime, abuse of officers on patrol does not serve any purpose other than to cause upset and damage the morale of frontline workers who do not make the rules.” 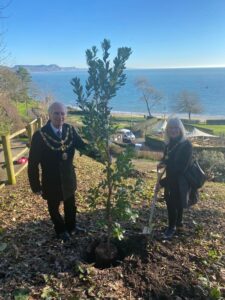 THE mayoress has planted the first tree in the new arboretum to mark The Queen’s Platinum Jubilee.

Mayoress Wendy Larcombe was joined by the mayor, Cllr Brian Larcombe for the historic occasion as she planted a strawberry tree in the Langmoor Gardens.

It is one of 70 new trees which will be planted in Lyme Regis to mark The Queen’s seven decades of service to the country and Commonwealth in June 2022.

Communities are being encouraged to mark the historic occasion by ‘Planting a Tree for the Jubilee’, in a scheme called the Queen’s Green Canopy.

The arboretum is being created at the top of the seafront gardens, where we felled a number of diseased, dying or dangerous trees to make way for 15 new specimen trees.

Mrs Larcombe had the honour of planting the first tree and a commemorative plaque will now mark the occasion.

Timber from the felled trees will be available free of charge to local residents to collect from Strawberry Field on Saturday, January 29 between 8am and 11am.

Strawberry Field is off Charmouth Road, opposite the park and ride site.

LYME Regis Town Council’s recent infighting has been condemned in the strongest possible terms in Dorset Council’s Community Governance Review, with several members of the public calling for the authority to be abolished. […]

Council ‘not satisfied’ with £25,000 traffic survey