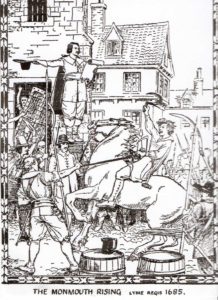 THE Monmouth-led rebellion was a result of anti-Catholic feeling in the western counties, with Monmouth’s aim to depose the Catholic-minded James II. The Duke promised that, when King, he would defend the country against popery, tyranny and oppression.

The invasion fleet consisted of a frigate, two merchant ships, some 83 men and equipment for the army who he hoped would rally to his support.

On the June 11 1685, Monmouth and his party came ashore on the beach in Lyme Regis that now bears his name. Having knelt in a prayer of thanksgiving, they unfurled a banner inscribed ‘Fear Nothing But God’.

They proceeded up Style Lane and made their way down West Street to the town hall, adjacent to Gun Cliff. The door of the building had been broken down (see illustration) to gain entry. A proclamation was read to the assembled crowd, calling them to support the rebellion and join Monmouth’s army.

Lyme had been selected as a landing place because its residents were known for their puritan Protestantism and its geographical location. However, the mayor Gregory Alford was a loyalist and he rode to Honiton from where he drafted a letter to the King in London, warning him of the Duke’s landing and the fact that he had been warmly received in Lyme.

Plans were put in hand to defeat the insurrection with the Duke’s old companion in arms, John Churchill (the future Duke of Marlborough), in charge of the royalist infantry.

Monmouth spent the first night in the George Inn and the next day tents were erected in a field east of the church for the purpose of enrolling men who were prepared to fight for the cause.

Many recruits came from the surrounding countryside to join the ranks of an ever growing army. Among them was Daniel Defoe, who later in life wrote Robinson Crusoe.

Recruits from Lyme were for some obscure reason allowed to form an independent company of some 80 to 90 men; it was the smallest unit in the rebel army, with others ranging from 500 to 800.

It was not until June 15 that Monmouth’s army marched out of the town; it numbered some 800 foot, 150 horse and three guns. They encountered a royalist force of Devonshire militia near Axminster and put them to flight.

The army marched on to Taunton gathering a large number of recruits as it went. As in Lyme, Monmouth was warmly welcomed.

The Battle of Sedgemoor fought on July 5 saw the rebels defeated and those not killed fled for their lives. Many who were captured were summarily executed, others died in overcrowded prisons while awaiting trial.

Monmouth was caught after fleeing the battlefield and later beheaded, his plea to the King for mercy rejected. It was a grisly death, five blows with the axe and then finally a knife to sever his head from his body.

The notorious Judge Jeffries presided over what became known as the Bloody Assizes, he was without mercy, death sentences were the norm.

September 12 saw 12 men executed on the beach where Monmouth landed. Lyme had to live with the consequences of the part it played in the uprising.

Town records make almost no mention of the rebellion but a detailed account of the battle can be found in John Tincey’s 2005 book ‘Sedgemoor 1685’.

ARTISTIC new boundary markers have appeared along the Dorset coast path to let walkers know when they have passed from one parish into the next. […]

HISTORY has always fascinated Lyme Regis resident Nigel Fortnam. His bookshelves are positively creaking under the weight of the heavy tomes chronicling the great events of our country going back many centuries. […]

TWO committee members of the Lyme Regis branch of the Royal British Legion have created a moving poppy display in the window of The Old Forge Fossil Shop, in Broad Street. […]