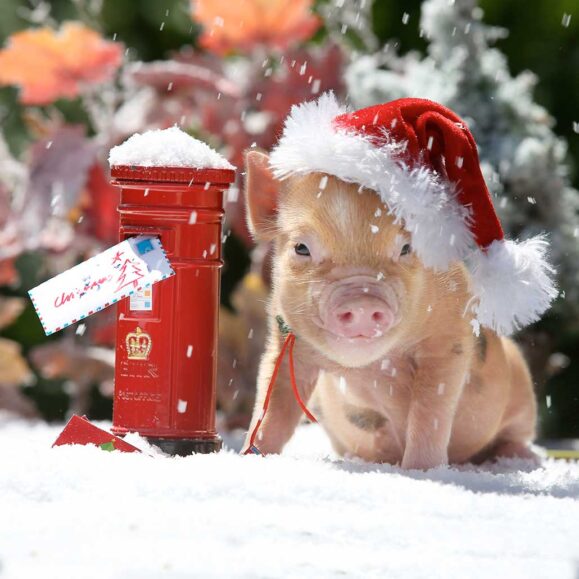 THIS coming year will be the tenth year I have been photographing the miniature pigs of Pennywell Farm for a calendar.

This little piggy is December’s calendar picture for 2019.

A career in which I’ve photographed royalty, politicians, film stars and footballers, the little cute piglets are still holding their own especially in the United States of America where a calendar called ‘Pocket Pigs Calendar’ has sold tens of thousands across the USA, Canada and Australia.

This year the calendar attracted the attention of Ellen DeGeneres, the most popular day time TV show host in the USA.

It all started on farmer Chris Murray’s family attraction farm, called Pennywell in Buckfastleigh. The American publisher ‘Workman’ of New York saw a picture of mine in the American press and so started a decade of photographing pigs, albeit little ones.

This picture was shot having built the set with false snow, props and a great deal of patience. The pig’s stage name is Broderick and he was absolutely brilliant, totally unfazed and very well behaved – an advantage being that he has been cuddled by children and adults since he was born.

The piglets have been filmed for dozens of TV companies both home and overseas. The next shoot will be for 2022 calendar.

Have yourself a sustainable Christmas – Part II

MAKING small changes and swaps to some of our much-loved Christmas traditions is easy and can also be fun and creative. […]

FATHER Christmas and his sleigh will be visiting Lyme Regis again this year, on the evenings of Wednesday, December 5 and Thursday 6. […]

Ending the year where it all started

THIS year has flown by in a bit of a whirlwind. It was a difficult start to 2018 with the closure of the View From newspapers, but after much support and encouragement from the local community, we decided to set up a new project. […]

It's already been a hectic start to the summer season, but that's just how our editor Francesca Evans likes it following months in lockdown. Read all about it in her latest 'All Over the Town' blog #lymeonline #lymeregis #dorset https://t.co/VV2S1omLA7
View on Twitter
0
0

Congratulations to Dan Bolton of Lyme Regis Butchers who has scooped three gold prizes in the Taste of the West product Awards #lymeonline #lymeregis #dorset https://t.co/P6ntnMPWXs
View on Twitter
0
1