THE new unisex toilets are open at last, the beach showers are actually working, the bunting’s up, the flower tubs are planted, the rubbish bins are being emptied regularly, the park and ride is running – from Charmouth Road at least – the streets have been resurfaced and the traffic jams in Broad have already hit warp-factor five.

It can only mean one thing – another summer season is nigh. And suddenly our councillors have a smile on their faces.

Kiss goodbye to peaceful strolls along the promenade for a few weeks, for if the scorching run-in to summer is anything to go by, Lyme will be rammed until the nights draw in and we wave a fond farewell to the visitors all determined to return to their favourite holiday destination.

“See you next year,” they say cheerily. “Oh no,” we groan. “They’re coming back again!” Or will they?

Many locals already give the seafront a wide berth for the next six weeks – “I never go down there in the school holidays” one told me this week – and there are many who believe that Lyme’s popularity has reached a level when we are in danger of driving people out of town, not encouraging them to return.

Is it possible to be too popular? To have too many visitors? Do we have sufficient resources to cope? The town is pretty evenly split on this. Those in business will obviously want to make hay while the sun shines. They pay dearly for the privilege of serving the multitude.

Others, especially those not involved in the summer trade, feel their lives are blighted by our ceaseless efforts to cram more people in, to accommodate more cars, to organise more events for them when all they really want is the sun to shine and the water to be warm.

A great friend of mine who has served this town well always says that when the car parks are full, Lyme is full, so forget about park and ride. But they will still come and clog up our verges, park outside our houses, block our narrow streets.

They come because Lyme is breathtakingly beautiful. Some go into raptures over the sheer delight of gazing out to sea. We who have lived here all our lives take it for granted.

The town, of course, would be a much different place without so many visitors. Some will argue it would be better, more peaceful, more tranquil, even more beautiful. And much poorer with fewer jobs and shops. Like all things in life, it’s a question of balance.

How many is enough? It’s an argument that will never be settled. Let’s be thankful it’s a problem we have to deal with. Just give a thought to those who wrestle with this every year.

Smiles all round in the new loos

JUST look at the smiles on their faces (above). In recent years town councillors in Lyme have taken some real stick over the state of the town’s toilets, even for the ones they don’t own.

So I suppose we can forgive them for looking pleased as punch with the refurbished toilets on the seafront on which they have just spent 80 grand of our money.

They gathered last week to inspect the new unisex toilets and posed for a team picture whilst they were there. I thought seriously about using the photo that went up on social media of three of them sat on the pans but thought better of it.

Was it a bit of fun or a huge PR gaff? When you are under siege, always keep the ball low, I was always told.

The big challenge the council now faces is whether they can keep the sparkling new toilets clean during the peak season.

They are also about to take over all the other public toilets in the town as well as the Tourist Information Centre and Cobb Gate car park from West Dorset District Council, which will soon disappear.

So whether they will be smiling next summer when these extra responsibilities and costs click in remains to be seen. But let them have their day in the sun.

Who’s up for council then?

LYME Regis Town Council has taken a battering recently over a number of issues – park and ride, clashing of seafront events, etc. – and there’s already talk of how many councillors will put up again next May.

Have they had enough? I only know of one who has definitely decided to stand down, mainly for health reasons, but I understand one or two others are considering doing likewise.

Jeff Scowen, the council’s most colourful member with ambitions to be the town’s next mayor, is confident that there will be a number of new faces as he encourages all and sundry to put themselves forward.

Recently he wrote on Facebook: “Hopefully, come next May with the new election, there will be greater diversity and mix of councillors: more women, more young people, more business and artistic types etc. We need a better representation of our community.”

If social media is any indication, it would seem that popular bar manager Matt Puddy, whose comments on the Lyme Regis Soapbox Facebook page have a huge following, would win great support in an election.

With more than 60 meetings a year, whoever puts themselves forward – and I hope there are some new faces – they are going to need plenty of free time.

My advice is that if you are serious about standing, go along to a few council meetings first and see how things work. It’s not everybody’s cup of tea. And you will need a thick skin! 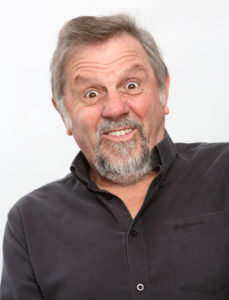 Jethro coming to Lyme is a ‘proper job’

MANY people in the town will be delighted to learn that West Country comedian Jethro will be appearing in Lyme Regis in September.

One of the few comedians with a West Country accent to make it nationally, Cornish comedian Jethro made his name by appearing on the Westward TV quiz show ‘Treasure Hunt’, fronted by Keith Fordyce, on which his catchphrase was “Proper Job”.

He went on to appear in all the most popular variety shows during 1980s/90s, the golden age of comedy, alongside such big names at Jim Davidson and Richard Digance in shows such as ‘The Generation Game’ and ‘The Des O’Connor Show’.

His first appearance in Lyme Regis was at the Marine Theatre as the star attraction at Uplyme and Lyme Regis Cricket Club’s annual dinner, organised by the late Dennis Applebee, who revitalised the cricket club after arriving in the town from North London.

I can remember the first joke Jethro told, definitely not suitable to be repeated on this website.

In the 1980s when Richard Digance lived in Lyme and Jethro (pictured) was at his most popular, he spent a few days in Lyme, alongside such names as Jim Davidson and Hale & Pace, in a week of entertainment, again at the Marine, in a bid to raise money to save Lyme Regis Hospital.

Richard Digance had persuaded many of his showbiz friends to come to Lyme to test their material before going out on summer tour. Jethro was one of them and he was encouraged by the other performers to try out an outrageous joke which brought the house down but again cannot be repeated here.

When variety as we knew it finally petered out, Jethro was rarely seen on television but continued to sell thousands of videos and attract hundreds to his club at Lewdown on the edge of Dartmoor. Parties from Lyme were regularly among the audience.

Jethro is still in great demand on the touring circuit. Recent visits to the Guildhall in Axminster were sold out within hours and I am sure that the house full signs will go up for his appearance at the Marine Theatre on September 19.

So stand by for more hilarious stories about Jethro’s big mate, Denzil Penberthy and numerous references to “what happened was…”

Dorset to get share of £1million funding to tackle domestic abuse

A GRANT of just under £1million has been secured to help tackle domestic abuse across Dorset and Hampshire. […]

DORSET Council has prepared its action plan for how the local authority will help tackle climate change over the next few decades. […]