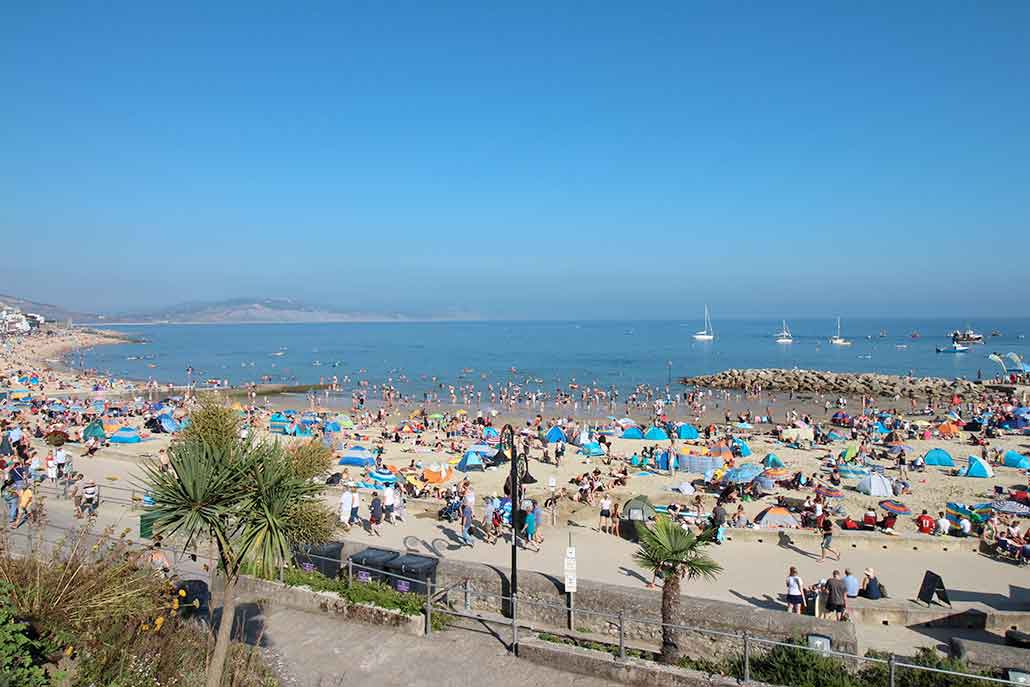 FROM SUNSETS TO RAIN CLOUDS, THE SKY TO THE DEEP BLUE SEA – WHAT MAKES UP THE COLOURS OF LYME?

Turner was known as the “painter of light” and to those of us who watch and observe the ever-changing skies over Lyme Bay, it is perhaps no surprise that he chose this particular location.

It is easy to see what makes the ‘Pearl of Dorset’ so special, with the waters of Lyme Bay stretching to the horizon and a vast expanse of sky allowing the sun to illuminate the coastline from sunrise to sunset. 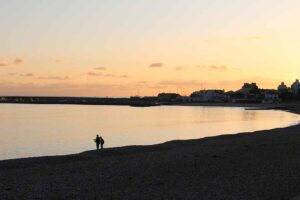 But where does that wonderful palette of colours come from? Let us start with the beautiful blue skies of summer.

As beautifully demonstrated in a rainbow, white light is made from all of the colours of the visible spectrum (red, orange yellow, green, blue, indigo, violet as we learn at school).

The sky is a blue colour because the atmosphere scatters the shorter wavelength (blue) light more than the longer wavelength (reddish) components. This effect is called Rayleigh Scattering, named after the 19th century, British physicist Lord Rayleigh.

With photons of light scattering off the oxygen and nitrogen molecules in the atmosphere like billiard balls, this means that our human eyes see blue light arriving from all different directions, and hence we perceive a blue sky. 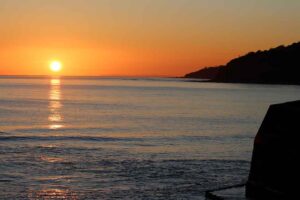 What about those glorious sunsets? When we look at the setting sun, our eyes mainly receive the direct red light rather than the scattered blue light.

As the sun drops lower in the sky, the light has to traverse much longer distances at a low angle through the atmosphere, meaning that only the red component is not scattered away from our line of vision. The dust and other pollutants that hang in the atmosphere can amplify this effect and add to the colours.

Let’s turn to the deep blue sea. It was once thought by Lord Rayleigh that the dark blue of the ocean was simply a reflection of the blue sky. During a Mediterranean voyage in 1921, the Indian scientist Sir C. V. Raman contemplated this and realised that this could not be the full explanation because the colour of sea water varies and does not always look like the sky.

After a series of experiments, Raman concluded that the vibrating water molecules in the sea scatter the white sunlight in such a way that 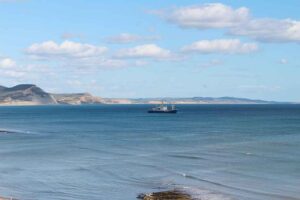 the wavelength of the emitted light is shifted to the blue part of the spectrum and hence the deep sea appears blue.

This is different to Rayleigh scattering where light is just deflected and emitted with the same wavelength.

This is not the whole story, though, because as we all observe, away from the deep ocean the colour of the sea varies and can be turquoise, brown or steely grey. The purity of sea water varies with location, time and depth.

Substances like salt, sand, silt, algae and phytoplankton literally muddy the waters. Particles of these substances scatter and absorb light differently to clear, open water and give us the colours that we see around the coast.

Given that clouds are made of water vapour, you might wonder why those fluffy clouds over the Jurassic Coast appear white. This is due to the fact that the water droplets are much larger than the wavelengths of light – and also much larger than the individual molecules and atoms in the atmosphere. 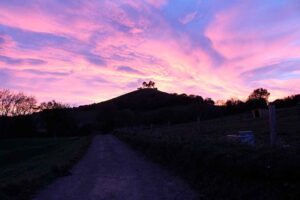 Consequently, reflection and refraction of light within these water droplets dominate and these processes depend much less on wavelength. Our eyes therefore detect all wavelengths equally – and therefore all colours – meaning that we observe white clouds.

The bottom of a cloud is often grey because most of the scattering has already taken place in the upper layers of the cloud.

Moody rain clouds are dark because they are laden with millions of larger water droplets in the upper most layers and these scatter light even more.

The skies and oceans will always be appreciated for their sheer artistic and romantic beauty. A little science though gives extra insight into the majesty of what nature conjures up for us in Lyme Bay!

2021 is finally here and let us hope that it is an improvement on last year. One of the things that we can look forward to is the mass vaccination programme against COVID-19 – and hopefully this will ensure a gradual return to normality. […]

LIKE many coastal towns, Lyme Regis was once home to a shipbuilding industry with shipyards flourishing around the Cobb. […]

A question of time in Lyme

2020 has been a strange year. During lockdown, I am sure that, like me, many of you found yourselves wondering what day it was and losing track of time as the days lost their usual routine and structure. […]